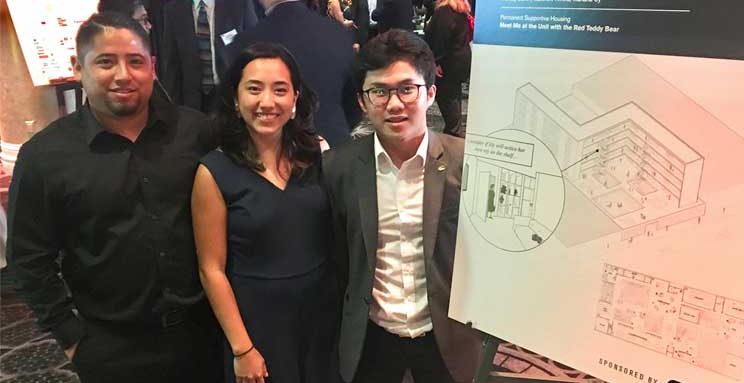 Each year the Los Angeles Business Council invites a team of designers from five of the best schools of architecture and design in Los Angeles County to tackle a design problem of regional concern. This year, the challenge was to design permanent supportive housing for homeless people prototype using modular construction that could be adapted to multiple sites. Their proposal needed to include both a 10,000-square-foot site and a 20,000-square-foot site.

The teams design, “meet me at the unit with the red teddy bear…” was inspired by the idea that the identity of each individual as part of a collective community should be of worthy consideration, said Sarun.

“Beyond a basic shelter, the personal belongings of homeless individuals are often overlooked as relevant elements of their lives,” said Sarun. “Such possessions exceed basic material needs for survival, maintaining significance as artifacts preserving one’s distinct identity…. We wanted to take into consideration that as humans, we all have certain things that we value most and that keep us rooted. With that as the basis of the prototyping model, this project proposes a storage/display system intended to be personalized by each inhabitant, giving expression to their own unique identities. As a whole, these individualized elements would together form a collective canvas for the building.”

The Julius Shulman Award was announced at the 49th Annual Los Angeles Architectural Awards on Friday, June 21 at the Beverly Hilton Hotel. Each student on the Cal Poly Pomona team received a $2,000 scholarship from W.E. O’Neill Construction.

Lorcan O’Herlihy, founding principle of the firm LOHA, praised the team’s ability to keep the needs of those who would benefit from their project at the forefront.

“The winning team had a wonderful story. They recognized who were going to be the tenants and had an understanding what was going to be important to them,” said O’Herlihy.

Deborah Weintraub, AIA, LEED AP, chief deputy city engineer for the city of Los Angeles, noted that the idea of modularity is challenging.

Cal Poly In the News