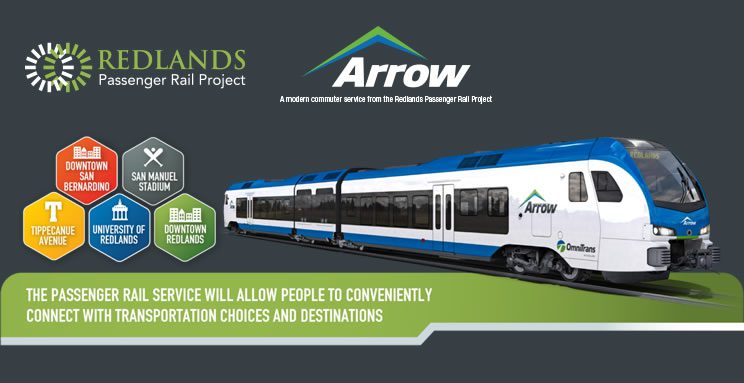 San Bernardino, CA – The San Bernardino County Transportation Authority (SBCTA) this week briefed public policy leaders on $287 million in newly funded transportation projects that will help shape the future of one of the fastest growing counties in the United States.

“We were very successful in securing funding for projects that will increase mobility and improve the quality of life throughout San Bernardino County,” Dr. Raymond Wolfe, SBCTA Executive Director, told the gathering of more than two dozen policy and legislative affairs representatives at the authority’s 2018 Legislative Luncheon.

Recently, SBCTA was awarded $218 million under Senate Bill 1 – 11 percent of the statewide total – and another $69 million under the 2018 Transit and Intercity Rail Program (TIRCP). Of that total, $106 million will go toward the Redlands Passenger Rail Project (RPRP), which not only will connect the East Valley with the Metrolink system, but will incorporate state-of-the-art air-quality technology.

Among the innovations RPRP, operating under the name Arrow, eventually will incorporate are Zero Emission Multi Unit (ZEMU) trains – the first of their kind in North America. Super battery packs will power the Arrow engines, and help establish San Bernardino County as a national leader in alternative transportation technology.

Other projects highlighted during Dr. Wolfe’s presentation included the widening of Highway 395, which is receiving $24 million under SB1; and the 1-10 Corridor project, which is getting $118 million.

The session also featured a legislative update by U.S. Rep. Pete Aguilar, who represents California’s 31st District. Aguilar applauded SBCTA for its success pursuing state funds and the importance of its self-help status to complete transportation projects. During his update he cautioned that the Highway Trust Fund – funded by the federal gas tax – isn’t keeping pace with the rapidly growing need for infrastructure maintenance and improvements.

Compounding the funding challenge for the Inland Empire are grant formulas that don’t adequately reflect the region’s rapidly expanding population. “This region isn’t just growing, it’s the fastest growing in the state,” said Aguilar, who is a leading voice on behalf of the Inland Empire and SBCTA as a member of the House Appropriations Committee and the Subcommittee on Transportation, Housing and Urban Development.