The 4th annual CSUSB Entertainment Marketing Coyotes of Comedy show, featuring performers from NBC’s “Last Comic Standing,” and “The Original Latin Kings of Comedy,” will be held on Friday, March 25 at Ritual Brewing Co. in Redlands.

Cal State San Bernardino marketing students are promoting the scholarship fundraiser comedy show presented by the CSUSB Business Alliance. The show will start at 8 p.m., with doors opening at 7 p.m. 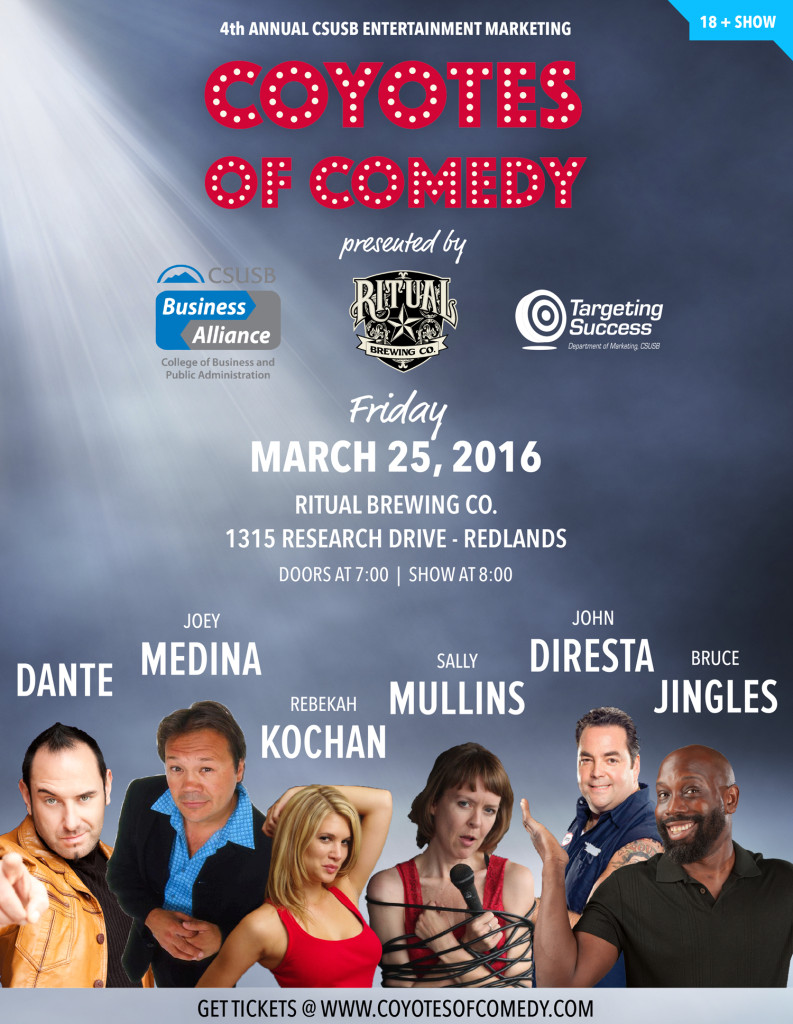 General admission seating is $25 per person, and other ticket plans, including company sponsorships and premium seating, are available. Ritual Brewing Co. is located at 1315 Research Drive, in Redlands.

This year’s Coyotes of Comedy headliner will be Joey Medina, who is a veteran of over fifty TV appearances, including his own SHOWTIME Comedy Special, titled “Joey Medina: Taking Off The Gloves.” Joey is also known for starring in Paramount Pictures’ “The Original Latin Kings of Comedy” with Cheech Marin, Paul Rodriguez, George Lopez and Alex Reymundo; becoming the highest grossing Latino stand-up comedy DVD of all time.

The show will also feature the return of Dante, who last year received a standing ovation from a full house. Dante is one of the top comedians in the world, winner of ‘NBC’s Last Comic Standing’ and record holder as the winner of the most B.E.T. Awards. Also returning to perform is Rialto, California native, Bruce Jingles; two-time winner of IE Weekly’s Comic of the Year. Jingles is a seasoned performer that has been featured on TMZ, SHOWTIME, and VH1. Opening the show is Sally Mullins; a regular at the Comedy Store in Los Angeles, with appearances on MTV, and Playboy TV. Other performing comedians include the very funny Rebekah Kochin and John Diresta.

Funds raised will support the CSUSB Sports and Entertainment Marketing Program and its scholarship fund. Last year’s event sold out, with more than 500 people in attendance, and organizers say they expect another sellout this year.

Eric Hutchins, a lecturer in the CSUSB marketing department and co-director of the Sports and Entertainment Marketing Program, said the event is completely run by students, though he does have a hand in guiding them throughout the year as they organize it.

“The amount of energy and effort that goes into organizing an event of this size is a tremendous undertaking,” Hutchins said. “The students plan the event, choose the location and talent, sell tickets, solicit sponsorships, stress-out and lose sleep just like a ‘real’ event coordinator would.”

To purchase tickets, and for information about company sponsorships, email coyotesofcomedy@gmail.com. Tickets may also be purchased online at the Coyotes of Comedy ticket website.

The scholarship has been funded by proceeds from the Sports Marketing Spring Classic Annual Golf Tournament and the Coyotes of Comedy event. In this way, current students will not only benefit from the scholarship but will also give back to future students within the concentration by working to replenish the fund, all while gaining valuable experience in the sports and entertainment industry. To donate, contact Eric Hutchins at (909) 537-3639 or ehutchin@csusb.edu.

In addition to providing students with the theoretical and conceptual marketing knowledge related to the industry, the program gives students the opportunity to apply their knowledge in the field of sports and entertainment marketing by overseeing events from conception to execution. The current event line-up includes the annual CSUSB Spring Classic Golf Tournament and Coyotes of Comedy event.

For information on the CSUSB Sports and Entertainment Marketing Program, contact Eric Hutchins at (909) 537-3639 or ehutchin@csusb.edu.

For more information about Cal State San Bernardino, contact the university’s Office of Public Affairs at (909) 537-5007 and visit news.csusb.edu.