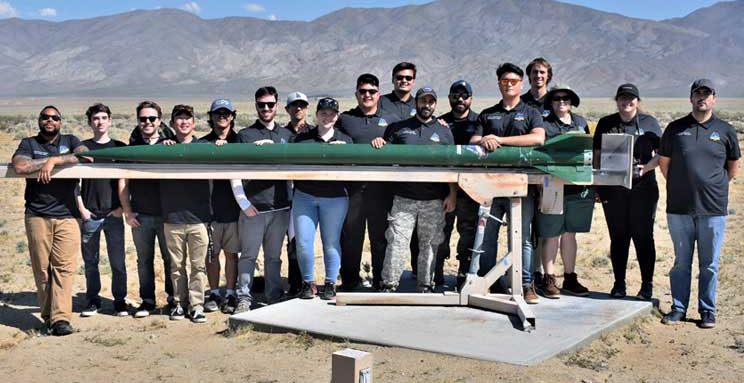 Pomona, Ca – A Cal Poly Pomona team captured first place in the Friends of Amateur Rocketry (FAR) 1030 Rocketry Competition when its rocket soared to 24,000 feet, setting a school record. The team with the second highest launch was the University of Central Florida at 21,350 feet.

The 14-foot-tall Bronco rocket, with student-designed and manufactured motors, weighed close to 130 pounds at liftoff and carried a small rover. It was constructed mostly out of convolute-wound carbon fiber, with the motor casing and fin assembly almost exclusively made out of aluminum.

The team consisted of approximately 25 students from the university’s Undergraduate Missiles, Ballistics, and Rocketry Association (UMBRA), divided into subteams such as aerodynamics, systems engineering, structures, avionics, payload and propulsion.

Design of the rocket started in September, and the team fabricated the first components in early December.

“We designed, mixed, and processed our own motors at an offsite facility,” said James McPherson, a junior majoring in aerospace engineering who served as the propulsion lead engineer. The self-built motor gave the team 1,000 extra points in the event.

“The components, such as the nozzle and casing, were all student-designed and manufactured… It produced a peak thrust of 1,300 pounds of force over the course of a 5.5 second burn. We produced one for a static test fire, which was conducted successfully at the FAR site in the Mojave Desert, and then one for flight.”

The students also formulated their own fuel, an Ammonium Perchlorate Composite Propellant (APCP), which is similar to the fuel in the boosters used on the space shuttle and the upcoming Space Launch System (SLS), said McPherson.

“There are… small secret ingredients that give us a boost in performance, but that’s proprietary information,” he added.

“To do something spectacular required unconventional methods,” said Demetrious Jarvis, payload lead engineer, president of UMBRA and a senior majoring in aerospace engineering. “It is amazing what can be accomplished when no one cares who gets the credit.”

Not everything went smoothly though.

“Manufacturing errors were the most challenging thing, especially when the thing you expect to be round…isn’t,” said senior Joshua Fofrich, the team manager.

Junior Cameron Harrington, the propulsion deputy engineer saw the challenges as an opportunity to learn under pressure.

“Being able to overcome technical complications at the drop of a dime, and developing that skill, was a perfect example of the learn-by-doing mentality that I got to see applied to real-world challenges,” Harrington said.

McPherson emphasized flexibility and teamwork to overcome the challenges.

“It’s the things you don’t anticipate that will slow you down,” said McPherson. “You think you have it all planned out and then you’re hit with a curveball; it helps to have a brilliant team to work through those curveballs and get back on track.

“The feeling of creating something that extreme that you put so much effort into, and seeing it take off, with the roar from the engine rumbling through your body, that was definitely the best part.”

UMBRA has well over a hundred members, who meet throughout the year to discuss rocketry, have fun, and enjoy being part of a diverse community of students from all majors, united by a passion for rockets and space. They offer workshops and organize field trips, but the biggest draw for aspiring engineers is the pro-teams, which are open to almost anyone. The pro-teams, with oversight from aerospace faculty, enter competitions such as the NASA University Student Launch Initiative, FAR1030-5R, Spaceport America Cup, and several others.