Community gathers for naming of the Gwendolyn E. Schlange center at MSJC

Ms. Schlange passed away on November 21, 2016. Beloved in the community, her career in education spanned more than four decades in the Hemet/San Jacinto Valley. She dedicated herself for more than 20 years as a trustee on the MSJC Board of Trustees. During her tenure on the board, she was thrilled to read Dr. Seuss books to the children in the centers on March 2, the birthdate Ms. Schlange shared with the late children’s author. She also served on the MSJC Foundation board to raise scholarships for students. The MSJC Board of Trustees took action in December 2016 to name the center after Ms. Schlange.

Liliana Gomez, the former MSJC student trustee who served from 2014 to 2016, said she remembered her first public meeting sitting with the full Board of Trustees. She said Ms. Schlange took her aside and assured her that she was going to be great.

“I feel like she really made an impact on my life,” Gomez said to those who gathered at the ceremony. “From the bottom of my heart, I just wanted to say thank you to her. She made such a difference (at Mt. San Jacinto College). I know that we miss her here so much.”

Gomez said she was also honored to have received a Catherine “Kit” Longe Stewart scholarship, a scholarship in memory of Ms. Schlange’s relative and also a longtime MSJC Foundation member.

Trustee Motte spoke fondly about her professional relationship with Ms. Schlange as they served together on the board for more than 20 years. She smiled as she told the audience that at elections, Ms. Schlange always drew the most votes compared to her colleagues on the board. In fact, she said, Ms. Schlange received more than 80 percent of the votes in her district.

MSJC Board President Tom Ashley sat with a group of children from the center to read from the book “Oh, the Places You’ll Go” by Dr. Seuss. 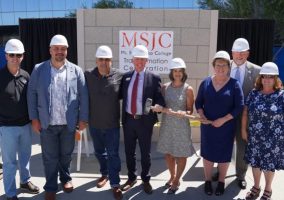 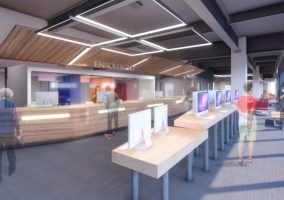 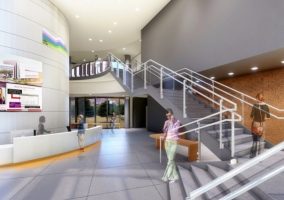