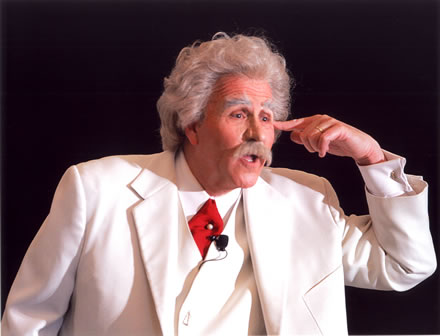 Victorville, CA – The recently released autobiography of Mark Twain has drawn renewed interest in the iconic American author, and Mike Randall travels from New York to offer a portrayal of his life in the form of Mark Twain Live. The hour long presentation talks about politics, bad habits and life on the Mississippi River during Huck Finn’s 35th Jubilee. The main stage presentation begins at 9 p.m. Friday, June 17th.

Mark Twain may be best remembered for his classic novel the Adventures of Huckleberry Finn first published in 1885. That book, jammed packed with controversial themes and memorable characters is considered the author’s greatest achievement. Ernest Hemmingway said that Huck  Finn “… was the one book from which all modern American literature came.” The truth is that the Adventures of Huckleberry Finn may never have been written if its author had not first found a frog in Calaveras County, California! Interestingly, Calaveras is not too far from Victorville where families celebrate the Huck Finn Jubilee each summer on Father’s Day weekend.

The birth of Mark Twain’s first published short story the Celebrated Jumping Frog of Calaveras County was printed November 1865 in a New York Newspaper and quickly reprinted around the country. The name “Mark Twain” exploded onto the national scene and launched one of the most famous writing careers in American literature. Though Mark Twain later discounted his frog story as a “villainous backwoods sketch”, America quickly embraced it and its author and has ever since. On the lecture circuit Mark Twain would bring out a shortened version of   the frog tale to the delight of his loyal fans.

Today, as communities around the U.S. read Twain’s newly released autobiography, Mike Randall as Mark Twain Live makes an exclusive Southern California appearance during his visit to Victorville and the Huck Finn Jubilee. He is introduced by Tom & Becky, Hannibal, Missouri’s ambassadors, who also plan a visit to the West Coast event. The one-man performance plans to tell tales about “life on the River” and address various topics, including bad habits, Huck and Jim, A Ghost Story, and of course, the famous California frog.

Randall has been portraying Twain for 37 years with performances ranging from The State Department in Washington D.C. to New York City’s only dinner theater, The Little Hippodrome. He’s often been compared to Hal Holbrook, and reviews credit him for giving a breathtaking re-creation of America’s most famous humorist.

The Mark Twain Live performance is included in Friday’s Huck Finn Jubilee admission of $20 per adult; $5 youth (6 years through 12 yrs). Children under 6 and parking are free. The Jubilee takes place at Mojave Narrows Regional Park, 18000 Yates Rd in Victorville, California.

Other activities relating to Twain’s storybook characters and their antics that take place during this year’s Jubilee are Tom Sawyer’s Fence Painting Championships, river raft building, tomahawk throwing, frog jumping and Injun Joe’s Treasure Hunt. For Huck Finn and dozens of other stories and hundreds of wonderful characters created by Mark Twain, it’s not too much of a stretch to conclude that “reports of Twain’s death can be greatly exaggerated.”