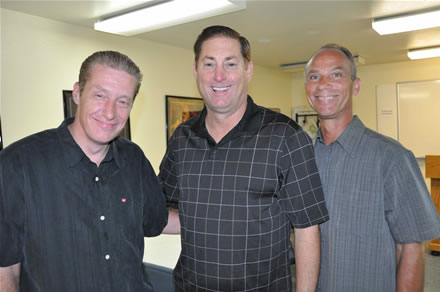 (SAN BERNARDINO, Calif.) Ever since he first completed The Salvation Army San Bernardino Adult Rehabilitation Center’s program in 2008, Richard Brewster has had a mission to help other men live sober lives. He’s now well on his way to a career as a drug and alcohol counselor.
Anthony Ethridge had artistic skills before he entered the Adult Rehabilitation Center in September 2010. In the program, he was able to develop those skills and begin a career as a graphic artist.

Brewster and Ethridge are just two of the thousands of men the San Bernardino Adult Rehabilitation Center has helped since it opened at its first location in 1977. More than 60, including Ethridge, have completed the program in 2011 alone.

“We teach them to feel good and confident about their lives,” said Jack Katzman, chairman of the Adult Rehabilitation Center advisory council. “They learn work ethics, how to dress properly, and how to make eye contact when speaking to others. We teach them to look beyond their past, and to look forward to a future with a renewed life. We teach them these values because the Salvation Army’s mission is changing people’s lives for the better.”

The six-month program is for men, known as beneficiaries, who have completed the detoxification process and are ready to leave their drug or alcohol addiction behind. The program helps them to begin a new and better life.

“In 1989, after drinking for 21 years, since age 12, I accepted the Lord,” Brewster said. “Though I had falls and slips over the next 21 years, that gave me hope, and I was able to stop for the most part. But when my mother died in 2006, I started drinking all over again.”

After initially completing the Adult Rehabilitation Center program in 2008, Brewster moved to Hesperia. He acquired two homes there to give himself and several other recent graduates of the San Bernardino program (to whom he rented rooms) a clean start and the support of each other.

Brewster called his homes “sober living homes.” His intent was for his original roommates and the other home’s residents to transition to life on their own, and for new men completing Adult Rehabilitation Center or other drug and alcohol treatment programs to move in and benefit from the support of those further along in their recovery.

He even enrolled in Victor Valley College with the intention of obtaining an associate degree in Alcohol and Drug Studies, which would have given him professional opportunities to counsel those who wish to overcome their addictions.

“I took one drink after 21 months of sobriety,” Brewster said. “I felt so much shame and guilt. What was really bad, I told myself I deserved a drink because of how well I had done.”

As he pondered his mistake, Brewster decided to re-enroll in the San Bernardino Adult Rehabilitation Center, and was able to do so in June 2010. After completing the program the second time, he decided he needed more structure than managing a sober living home would provide.

Brewster has been in Path to Prosperity for a little more than six months. In that time, he has enrolled in San Bernardino Valley College and completed most of the remaining requirements for his Alcohol and Drug Studies certificate. He will be obtaining an associate degree in Alcohol and Drug Studies before transferring to California State University, Fullerton for further study.

“My main goal is to help those who have experiences similar to mine,” Brewster said. “I hope it will be with The Salvation Army.”

Brewster is starting his professional experience there at least. For his last two semesters of San Bernardino Valley College, Fall 2011 and Spring 2012, he will work as an intern at the San Bernardino Adult Rehabilitation Center, helping the staff to counsel men who find themselves in the same place he has been twice.

“I learned about effective communication, business skills, and human relations,” Brewster said. “That gave me a foot in the door when I applied at Valley College.”

Ethridge credits Adult Rehabilitation Center with helping him see a way to turn his passion for art into a career. He hopes to begin studying Graphic Arts at San Bernardino Valley College in the fall, provided he’s able to obtain sufficient financial assistance. In the meantime, he has done some free-lance work.

“Adult Rehabilitation Center gives you tools to live a sober and meaningful life,” Ethridge said. “Once you have those tools, you go and look for opportunities to use them.”

Ethridge had come to Adult Rehabilitation Center voluntarily, but less willingly than Brewster.

In early 2010, a court order forced Ethridge’s brother to enroll in the Adult Rehabilitation Center’s program. When his brother neared the end of his program, Anthony’s daughter arranged a three-way phone call between herself, her uncle and her father.

The Salvation Army required Ethridge to wait until his brother completed the program before he enrolled in September 2010. Two brothers cannot be enrolled in the program at the same time, because his sibling’s presence would cause each man to be less self-reliant.

“At first I enrolled only to please my daughter,” Ethridge continued. “It wasn’t until I was almost done with my six month program that I realized I had really done it for myself.”

Ethridge learned many other people besides his brother had been able to overcome drug or alcohol addiction by following the principles taught by The Salvation Army.

“I listened to hundreds of people who live a sober life,” Ethridge said. “I was getting my first taste of sobriety, and I liked it. This is the longest I have been sober in my adult life, but I still have a long ways to go.”

Ethridge stayed at the Adult Rehabilitation Center a total of nine months, waiting three additional months on Path to Prosperity’s waiting list. He needs the structure of Path to Prosperity because he doesn’t yet feel ready to live with complete independence.

“When you are alone out there, you tend to fall back on the things you knew,” he said.

But he’s on his way to a changed life.

The Adult Rehabilitation Center put Ethridge to work in the warehouse, where donations of used goods are inventoried, repaired and distributed to six stores in San Bernardino County and Pomona. Since he had previous experience as a painter, he was given the task of touching up paint on donations needing it.

“I painted a picture of Jesus with his arm on a man’s shoulder,” Ethridge said. “They were so impressed, every time they needed a sign painted after that, they asked me to do it.”

Adult Rehabilitation Center’s requests for Ethridge’s assistance with sign-painting have even continued since he moved to Path to Prosperity. Ethridge doesn’t mind helping them, and plans to give back his time as a volunteer sign-painter for as long as he can.

“The Salvation Army has opened doors for me,” he said. “But the thing I am most thankful for is it has given back to me a life with my daughter. For that, I will always be grateful.”

The Adult Rehabilitation Center is a six-month program, combining rehabilitation and work therapy for men who wish to overcome drug or alcohol addiction. These men attend Alcoholics Anonymous or Narcotics Anonymous meetings, receive one-on-one and group counseling, and learn about stress management, anger management, parenting and overcoming addiction. They also participate in spiritual and recreational activities they can continue after their treatment as part of a sober lifestyle.

Men in San Bernardino County or Pomona Valley who are seeking help to overcome drug or alcohol addiction should call the Adult Rehabilitation Center in San Bernardino at (909) 889-9605. The Salvation Army offers a similar program for men in Riverside County; for more information about that program, call (951) 940-5790.

The Salvation Army is an evangelical part of the Universal Christian Church. One of the largest charitable and international service organizations in the world, The Salvation Army has been in existence since 1865 and in San Bernardino since 1887, supporting those in need without discrimination. To donate, call 1-800 SATRUCK.