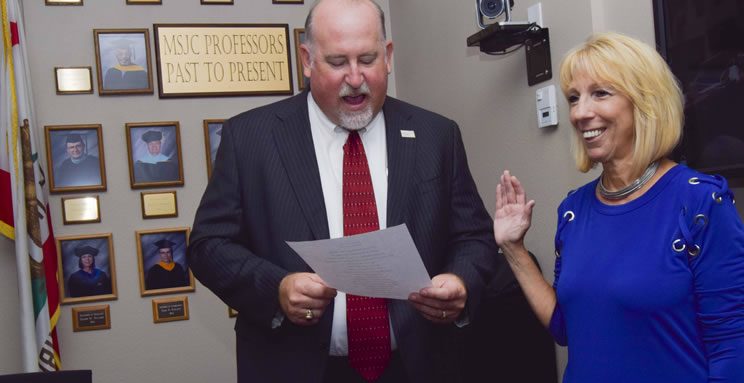 San Jacinto, CA – Vicki Carpenter was appointed on Thursday, September 13, 2018 by the Mt. San Jacinto College Board of Trustees to fill the Trustee Area 3 vacancy.

Trustee Area 3, which takes in communities that include Menifee and portions of Hemet, is one of five trustee areas for Mt. San Jacinto College. Mrs. Carpenter resides in Menifee.

The seat for Trustee Area 3 became vacant after Bill Zimmerman resigned in August to accept an appointment as mayor of Menifee. Mr. Zimmerman’s term would have expired the end of 2018. The board voted to appoint an individual to fill the vacant seat rather than call for a costly special election. Mrs. Carpenter will serve the remainder of that term. She also filed to run for the seat in the Nov. 6, 2018 election. She is the only candidate who qualified to run for the post, as the other candidates withdrew, according to the Riverside County of Registrar of Voters. Mrs. Carpenter will take her Oath of Office to serve a four-year term in December 2018.

Mrs. Carpenter started her career as a paralegal before transitioning into real estate in 1991. She is a real estate agent with Coldwell Banker, where she also serves as career development director/training and is part of the agency’s management team. She has served on numerous community boards, including as past president on the MSJC Foundation board, the Menifee Valley Medical Center Foundation, and the Inland Valley Association of Realtors. She is president of the Menifee Valley Chamber of Commerce, a member of the Rotary Club of Menifee, a director with the California Association of Realtors and a former director of the Southwest California Legislative Council.