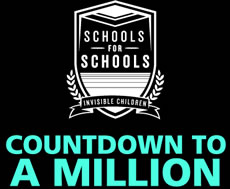 Murrieta, CA – For the past two months, students at Murrieta Valley High School have worked tirelessly to raise money for students in northern Uganda, through the U.S. based nonprofit Invisible Children’s Schools for Schools campaign. To date, high schools and colleges across the U.S. have raised over $800,000 in their goal for one million dollars by December 17th.

The competition involves schools, like Murrieta Valley, competing against other schools to raise the most support. The schools that raise the most money in their region will win a trip with Invisible Children to Uganda to see first-hand what their hard work is accomplishing. On Friday, students will find out if they won the competition.

The money raised has come from a lot of small fundraisers adding up. Events include car washes, bake sales, caroling, and other creative endeavors like hijacking admission (with permission) to Friday night football games. Students at Murrieta Valley High School have also had a benefit concert at The Vault which featured local bands such as Walk the Rio and On Being Human coming out for support.

Now, students are in the final stretch and are asking the community to come together and support their final push of fundraising efforts. Visit s4s.invisiblechildren.com and search for Murrieta Valley High School for more information.

Invisible Children is dedicated to inspiring young people to help end the longest running war in Africa. With money the organization receives from young supporters through School for Schools, it implements programs in Uganda to rebuild schools devastated by war, provides clean water, books, equipment, refurbishment of structures, teacher support, and technology among many other things. For more information on Invisible Children, visit invisiblechildren.com.