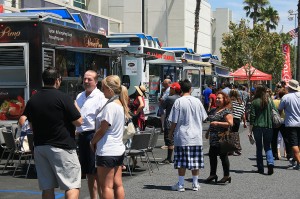 ONTARIO, Calif., – Bring an appetite to the Inland Empire Auto Show because this year, some of the best food trucks from Los Angeles, San Diego and the Inland Empire will be serving up award-winning, on-the-go fare. Famed food trucks at the Food Truck Zone include My Delight Cupcakery, A RockIn Ice, Slammin’ Sliders, Red Robin Yummm Mobile, Bacon Mania, Thai 1 On, Dogtown Dogs and number the one rated The Grilled Cheese Truck. Show goers who test drive a car in the auto show’s Ride & Drive event will also receive a free food truck voucher while supplies last. The Inland Empire Auto Show takes place Friday through Sunday, August 24-26, 2012 at the Ontario Convention Center in Ontario, Calif. For tickets for the show and to get one’s fill at these acclaimed food trucks, log onto www.IEAutoShow.com. Tickets are also available at the door.

My Delight Cupcakery offers a traveling array of confectionary treats, sure to satisfy the most discriminating sweet tooth. Pastry Chef, Naomi Moreno, whips her delectable mini-cakes flavors such as “birthday” – a take on the classic birthday cake with sprinkles – and the “late night breakfast” – a waffle-inspired cupcake with fried chicken on top of buttermilk frosting. “By far, the single best thing I [tried] was the Breakfast Cake from My Delight Cupcakery in Ontario. It was like a buttermilk pancake, whipped maple syrup and bacon in a cupcake. I can’t believe that I didn’t buy a dozen,” said a Los Angeles Times writer. Cupcakes range from $2.00 to $4.00.

For those looking to cool off at the auto show, stop by one of the southland’s most sought-after food trucks,

A RockIn Ice. Recently on the Food Network’s online Great Food Truck Race, A RockIn Ice serves up refreshing Hawaiian shave ice in a rainbow of both tropical and decadent flavors. 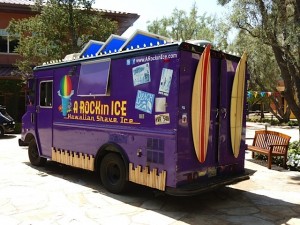 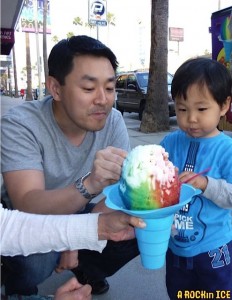 The Red Robin Yummm Mobile serves up the favorites of their all-American brick and mortar restaurant in a convenient, on the go style. Everything from gourmet hamburgers to BBQ chicken sandwiches and fresh-tossed salads grace the Yummm Mobile’s menu.

According to the Dogtown Dogs website, each hot dog on the menu presents a sophisticated variation of traditional favorites with an innovative spin. These dogs’ soulful flavors elicit a sense of nostalgia and with more than 7,000 Twitter followers, the Dogtown Dogs food truck is on its way to becoming a So Cal favorite.

Thai 1 On comes all the way from sunny San Diego with a claim to fame as the city’s first food truck. Thai food lovers will be in luck at the IE Auto Show because this food truck serves up delicious eats inspired by Thailand’s street food culture.

Bacon fans rejoice because the BACON MANia truck will be at the Inland Empire Auto Show all three days serving unabashedly American, unapologetic man-food from a fun, friendly and a little bit funky nomadic food truck.

Show goers can check out the hottest cars and trucks from top auto manufacturers such as Toyota, Subaru, General Motors, Chrysler, Fiat, Volkswagen and many more at the Inland Empire Auto Show. When attendees feel the hunger pangs set in, the Food Truck Zone awaits with an entire array of tastes.

About the Inland Empire Auto Show

The Inland Empire Auto Show (IEAS) is San Bernardino and Riverside Counties’ largest auto show and will be held August 24-26, 2012. The show is produced by the Ontario Convention Center, On the Edge Productions, and DRIVEN Media Communications. The show serves as a fun and informative event for residents across the Inland Empire and beyond.