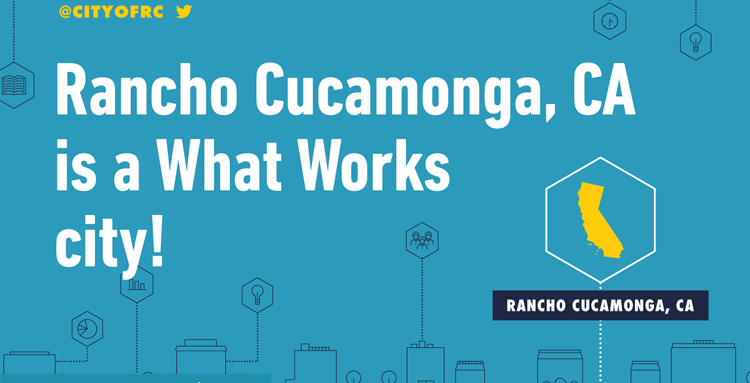 Rancho Cucamonga, Ca.  – Bloomberg Philanthropies’ announced that Rancho Cucamonga has been selected as one of three new cities to participate in their nationwide What Works Cities (WWC) initiative – one of the largest-ever philanthropic efforts to enhance the use of data in decision making in the public sector.

Rancho Cucamonga will receive technical assistance from world-class experts to build skill sets and processes to address local issues. This project will focus on developing a process for collecting and analyzing data to help measure performance and aid in decision-making for maintenance and operations within the City’s Westside landscape and lighting districts, with a goal to expand those best practices city-wide.

Rancho Cucamonga’s selection, along with New Haven, CT, and Oklahoma City, OK, was announced today by WWC Executive Director Simone Brody at an event hosted by the initiative in New York City. “What Works Cities: How Local Governments Are Changing Lives,”  which showcases accomplishments of cities participating in the initiative over the past two years, was also released at the event.

“We are proud to welcome these new members to our growing movement of leaders committed to using 21st-century tools to solve their cities’ challenges,” said Brody. “Across the country, What Works cities are drawing on insights gleaned from data to make better, fact-based decisions about how to determine priorities, allocate resources, deliver services and, ultimately, improve the lives of the residents they serve.”

With today’s new participating cities, WWC is now partnering with 80 cities across the country that are home to 26 million people in 36 states and have annual budgets exceeding $92 billion. The initiative will partner with 100 cities on a rolling basis through 2018.

“We are proud to be selected by Bloomberg Philanthropies to receive technical assistance. This partnership will help us move our existing programs to regularly collect and analyze data to the next level of accuracy and efficiency in order to monitor performance and continuously improve upon the already strong services we provide for our residents,” shared City Manager, John Gillison. “This initiative will have a major impact on our programs to use data and evidence that will more accurately and timely inform real world decision-making and enhance existing efforts to create a data-driven culture throughout the organization.”

With support from a consortium of expert partners, What Works cities are identifying more effective ways to evaluate programs and improve performance; best use resources to serve their communities; and address a range of social challenges – from public safety to affordable housing. Another key benefit is joining What Works Cities’ growing national network of local leaders and global experts actively sharing best practices for outcomes-focused government.

Through the What Works Cities partnership, Rancho Cucamonga will work with the John Hopkins Center for Government Excellence (GovEx) to establish and improve data collection and performance management practices in order to set, track and share progress toward priority goals, strengthen accountability and achieve better results. This project will focus initially on the City’s Westside landscape and lighting districts by setting key performance goals and collecting and analyzing data to ensure the City is making the right investments and operating as efficiently as possible within these districts. The ultimate goal is to develop a system for using data to drive decision-making and monitor performance that can be replicated city-wide.

The consortium of leading organizations assembled by Bloomberg Philanthropies and delivering a program of support to cities comprises the Behavioral Insights Team, the Center for Government Excellence at Johns Hopkins University, the Government Performance Lab at the Harvard Kennedy School, Results for America and the Sunlight Foundation.

About What Works Cities:

What Work Cities, launched in April 2015, is one of the largest-ever philanthropic efforts to enhance cities’ use of data and evidence. Through the initiative’s expert partners, which are providing technical assistance to 100 cities on a rolling basis through 2018, cities around the country are receiving support, guidance and resources to succeed. In 2016, What Works Cities was named by Forbes as “one of the ten most promising philanthropic bets” of the year and by Engaging Local Government Leaders as the “most important company operating in the local government arena.”

What Works Cities in the Inland Empire 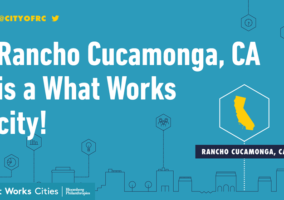 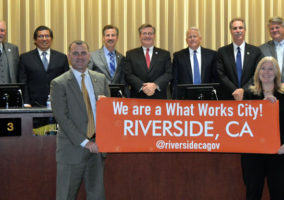