Redlands: Class of 2016 is service-oriented, techie, and academic-focused according to survey 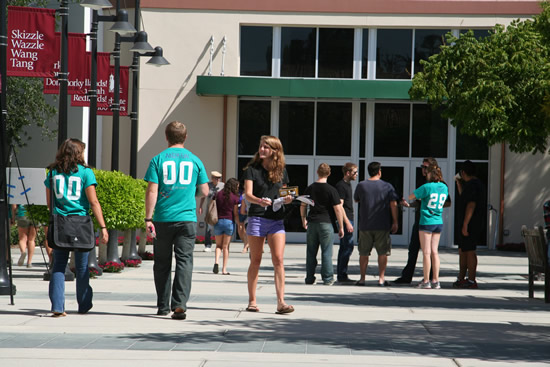 REDLANDS, CA – Smart-phones, iPods, and game consoles will travel with incoming freshmen to the University of Redlands campus when they move in on August 29. A vast majority of them – 99 percent – will pack their cell phone or smart phone, while 40 percent admitted they will bring a pillow pet. The incoming class, which will be required to earn credits for community service to graduate, responded to the survey that the majority plan to focus their volunteer efforts on helping animals while others will center their attention on mentoring issues and education. Mentoring and education were the top two community service areas for the class of 2015.

Like me on Facebook
Redlands freshmen are heavily involved in social media. They are Facebook enthusiasts, but don’t like to check-in on Foursquare. Ninety-three percent of Redlands freshmen maintain a Facebook profile, but only 13 percent are active on Pinterest. Nearly every freshman, 97 percent, will bring a laptop and they listed this item as the one they couldn’t live without during their freshman year.  These answers make sense as a large number of students cited the internet as their main source of news – this hasn’t changed since last year.

In addition, 73 percent of the class indicated that they had befriended a fellow University of Redlands classmate via social media before the start of the school year. But, the students are old-fashioned when it comes to note-taking for class since the majority indicated they will be using pen and paper for this activity.

Walking the Walk
By a significant margin, the incoming freshmen demonstrated this is a class that knows how to think and work on its feet. Freshmen indicated that 77 percent of them plan to walk as their main form of transportation, a four percent spike compared to last year. The students also responded to the survey question about a very important chore that shows their level of independence. As it turns out, 84 percent of the freshman class has done their own laundry before.

The top two concerns of the class of 2016 are keeping up with their academics and choosing the right major at Redlands. An interesting piece of data was that 63 percent of the class of 2016 indicated that they will not be studying or majoring in the area or profession that they wanted to be when they were a child. On the other hand, 80 percent of the students plan to study abroad in countries such as Austria, Brazil, Morocco, and Cambodia.

Other data from the survey included 73 percent of students expect their parents to cry when they say good-bye, and the majority expect the moms to be the ones wiping off tears.

What type of stuffed animal or pillow pet did you bring?

What are your favorite artists?

What app can you not live without?

What is your biggest fear about going away to school?

Methodology
The 803 incoming freshmen received a 26-question electronic survey shortly before arriving at the University of Redlands campus for check-in.  The survey had a 29 percent response rate.

The University of Redlands is a independent, non-profit, liberal arts and sciences university consistently ranked among the best universities in the nation by U.S. News & World Report. Since the university’s founding in 1907, Redlands has emphasized academic rigor, personal development and interdisciplinary studies. An Education + culture of elevated learning provides students with a holistic education that results in a unique life transformation. Redlands students learn equally about service, commitment, life and the world. As a pioneer in the burgeoning field of spatial learning, Redlands integrates spatial learning across academic disciplines. At the innovative Johnston Center, students have the opportunity to design their own custom major. Home to one of the oldest accredited music programs in California, the conservatory-style School of Music educates the whole musician. Adults may continue their education with programs tailored for working professionals at the Schools of Business and Education, offering evening degree-completion and graduate programs at 11 convenient Southern California locations.