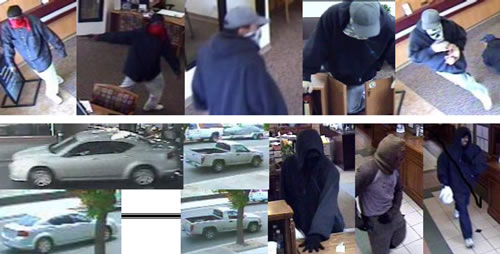 At least three men known to law enforcement as the “Greenhorn Bandits” are being sought in connection with three bank robberies during the past two weeks in Los Angeles and San Bernardino Counties, announced Steven Martinez, Assistant Director in Charge of the FBI in Los Angeles, on behalf of the multiple agencies investigating the robberies; including, the Los Angeles County Sheriff’s Department the Redlands Police Department and the FBI.

Witnesses have described the Greenhorn Bandits as either black or Hispanic males between the ages of 25 to 33, and between five feet, eight inches to six feet tall. The bandits can be seen in bank surveillance photographs wearing bandanas and hooded sweatshirts.

During the three robberies, the bandits were seen using handguns and witnesses described being ordered to get on the ground and put their hands up, while the suspects demanded cash.

The group was nicknamed the Greenhorn Bandits due to fact that witnesses described them as clumsy and inexperienced, which investigators note could add to the potential for violence. The suspects are considered armed and dangerous.

The Greenhorn Bandits are suspected in the following robberies:

Additional information and photographs of bank robbers currently being sought by the FBI’s Los Angeles Field Office can be found by visiting www.labankrobbers.org.