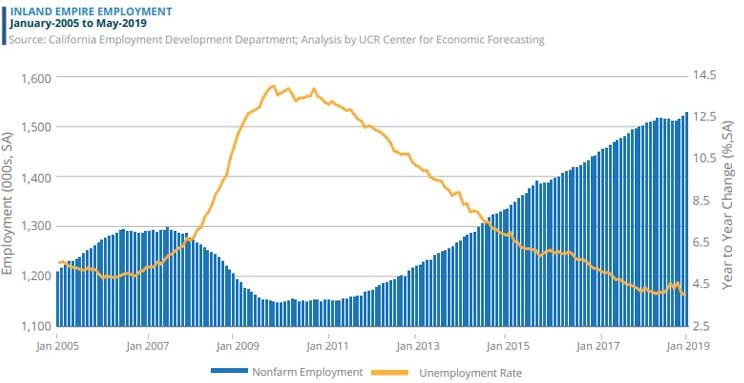 Riverside, CA. — Like the rest of the state, employment growth in the Inland Empire has slowed, although wage gains continue – and have fueled increases in nearly every local spending category from restaurants and hotels to business and industry, according to an analysis released today by the UC Riverside School of Business Center for Economic Forecasting and Development.

From May 2018 to May 2019, nonfarm employment in the Inland Empire increased a moderate 1.7%, about on par with the state as a whole. Last year, the region had been posting significantly higher levels of growth and regularly outpaced the state in employment gains. The slowdown can also be seen in the region’s labor force, which grew by just 2,000, or 0.1%, over this same one-year period.

Despite the slowing in employment, wages in the Inland Empire have continued to increase, although at a more modest pace than in the state. Earnings in the region grew 2.6% from 2017 to 2018 (the latest data available) while they jumped 4.1% in California as a whole.

Wage growth has triggered greater consumer and business spending both locally and across the state. Taxable sales in the Inland Empire increased 7.8% from the first quarter of 2018 to the first quarter of 2019, compared to 8.3% in California. Although spending in the region has increased across nearly all categories, business and industry sales tax receipts are leading the way with a 5.4% pace of growth. The top consumer spending category is restaurants and hotels, where taxable receipts jumped 3.7%.

“Although we’ve seen a recent deceleration in employment growth, the tight Southern California labor market has sustained wage gains – and that’s translating into more spending by businesses and consumers,” said Robert Kleinhenz  Executive Director of Research at the Center for Economic Forecasting. “Looking ahead, with the U.S. expansion now in record-setting territory, the Inland Empire economy may grow more slowly in the coming months but will stay on its current growth trajectory.”