Amgen Tour of California to Race in the Inland Empire 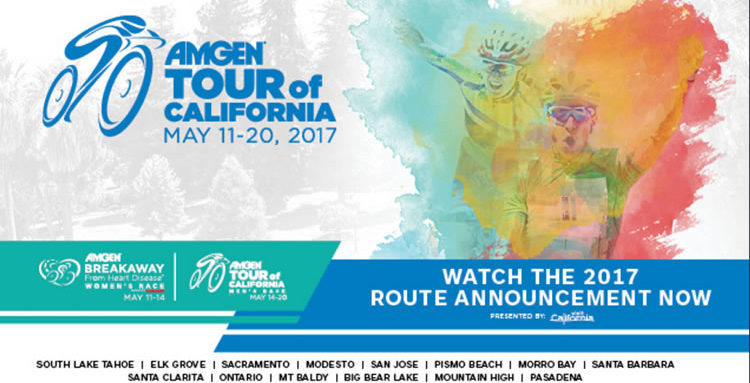 Inland Empire – Amgen Tour of California organizer AEG announced the 575-mile course for the 2017 UCI WorldTour race, which will take many of the world’s best cyclists on an always picturesque, challenging and highly competitive competition through California’s iconic highways, byways and coastlines this spring. The twelfth annual edition of the men’s race will visit 12 Host Cities from Sacramento to Big Bear and will include 3 stages based in the Inland Empire.

Presented by Visit California, the route announcement includes a visual overview of the 2017 men’s and women’s courses at www.amgentourofcalifornia.com/stages.

Expected Outcome: Good chance the race will stay together until the final three miles when a small group is likely to attack the summit, and the best legs will win the day. The winner of the 2017 Amgen Tour of California could be decided on the final 15 switchbacks to the finish atop Mt. Baldy. It’s been called the “Queen Stage” and compared to the epic stages of the European Grand Tours. The training ground for many local Southern California riders, the race will return to the mountaintop finish that thrilled fans in 2011, 2012 and 2015. Only a handful had done the entire route, but after the race contested the climb in 2015, this is now one of hottest Strava segments in the U.S.

The race will begin at the Ontario Convention Center, marking the third time Ontario has hosted a stage culminating at Mt. Baldy.

This year’s route will head north into Upland. From here, the riders will start an 11-mile climb to the Village of Baldy. After an acute left, the racers will face another mile of climbing up Glendora Ridge Road to their first of three monster KOMs. From there, they will face 12 miles of narrow and twisting roads that gradually lead to a fast and technical descent down the backside of Glendora Mountain Road. Riders and fans alike can expect spectacular vistas throughout the Angeles National Forest. Another descent down East Fork will take the riders to Highway 39 and the town of Azusa. Heading east, they’ll race through the outskirts of Glendora. A left turn onto Glendora Mountain Road (known by locals as the infamous “GMR”) will invite the peloton to a grueling 9-mile climb to the second KOM of the day followed by 12 miles of a slight climb back to Baldy Village. A left turn back onto Baldy Road will see the race gain 1,000 feet in just two miles… but the real climbing will be yet to come!

At Ice House Canyon, the route will make a hard left turn where the sign to the ski area points toward the sky. Over the next 2.5 miles, the riders will face 10 switchbacks on a road so steep many of the race vehicles cannot make it to the top. With 1.2 miles to go, the road will straighten and the finish will be visible ahead. At .25 miles to go, the route will make a hard left and the racers will face the final five switchbacks to the finish line, where legends are made. The stage will include two sprints, three KOMs and a massive 12,000-foot elevation gain.

Expected Outcome: The course is flat and fast, but the mountain elevation will take its toll on the riders. Especially if the overall race is close, the leaders, who will be last to ride the course, will do everything in their power to earn precious seconds. A

t 6,752’ and featuring one of the most beautiful lakes in California, the City of Big Bear Lake will welcome spectators for the third time – this year for the fan-favorite Individual Time Trial stage, where racers will take off one at a time, riding against the clock for the best time of the day.

The course will begin in the heart of the Village in Big Bear Lake. The first three miles of the route wend through a residential section along the south shore of the lake. Taking the Stanfield Cutoff across the lake, the course will turn left, continuing on Hwy 38 to the town of Fawnskin. As the riders turn back toward the City of Big Bear Lake following essentially the same route back into town, they can expect large crowds in Fawnskin. Heading right onto Big Bear Blvd. with just .6 miles left, the riders will then turn left onto Pine Knoll Ave, through a narrow stone archway and onto a 1,000-foot jetty. For riders pushing their physical limits, the finish line will very close to the water’s edge!

This is very flat and fast course. Don’t expect riders to score huge time gaps over their rivals to take a big lead into Stage 7.

Expected Outcome: Teams will ride to protect race leaders through this mostly downhill stage punctuated by moderate climbs. Expect an electrifying group sprint finish to close out the 2017 race. What would the Amgen Tour of California be without a quick tour of the Angeles National Forest? Often called Los Angeles’ “backyard,” this will be the race’s 13th visit to this iconic California gem! Starting at the Mountain High ski resort and finishing in Pasadena (second and fifth visits respectively), there will be a lot of downhill to this stage.

Not to worry, the action will come on strong with two sprints and three KOMs with 6,400’ of climbing. The final stage will eventually descend into the City of La Cañada Flintridge and the outskirts of Pasadena. As in 2014, the winner will be crowned in the heart of downtown Pasadena on Green Street in front of Convention Center. The finish will feature a long straightaway that will allow the teams to launch their sprinters. It should make for an incredible finish to the 2017 Amgen Tour of California.