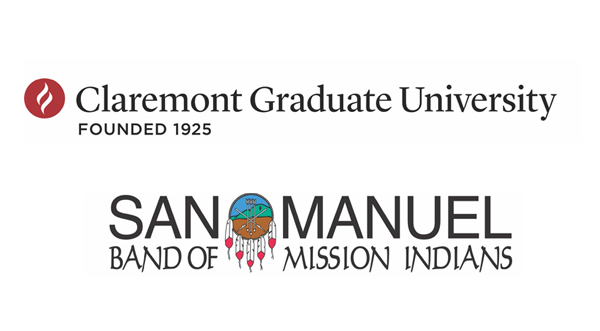 CLAREMONT, Calif. (December 5, 2020) – Claremont Graduate University (CGU) announces one of the largest gifts in its nearly 100-year history—$14 million—from the San Manuel Band of Mission Indians in Highland, CA, to purchase the Huntley Bookstore building at the heart of The Claremont Colleges, a unique group of institutions in U.S. higher education.

An iconic example of mid-20th century architecture, the building will serve as the home of the Yuhaaviatam Center for Health Studies, an innovative, multi-disciplinary health research center rooted in a health and well-being initiative launched more than a year ago.

Bearing a name that means “People of the Pines” (which refers to the original inhabitants of the area who are the ancestors of the San Manuel Band of Mission Indians), the center will facilitate the collaboration among CGU researchers, scientists, and outside partners to address health and well-being challenges especially prevalent in underserved, vulnerable populations of the Inland Empire and Indian Country.

CGU is located on the threshold of the Inland Empire, a region with a high prevalence of chronic disease where many underserved residents lack sufficient health coverage or awareness of the benefits of wellness and preventative care.

When residents need a doctor, they face challenges to access due to an overstressed healthcare system. Such underserved populations include Native American communities, which historically have higher rates of diabetes, obesity, heart disease, mental health issues, lack of overall wellbeing, and other chronic conditions.

San Manuel’s collaboration with CGU demonstrates how partnerships can provide a strong and effective framework to address longstanding social inequities. Discussion of this historic gift began in 2019 but was delayed due to the COVID-19 pandemic crisis, and it comes at a time when such partnerships are needed to produce even more meaningful responses to public health challenges.

CGU President Len Jessup said the partnership between CGU and the tribe will make it possible to create “powerful new collaborations on preventive and proactive responses to the kinds of chronic illness affecting so many today.”

Future research at the center, he added, will address “many of the ‘underlying conditions’ we’ve been hearing about during the pandemic. It’s our hope to eventually produce the kinds of research at this center that will help prepare everyone, especially our most vulnerable populations, for the challenges of another global crisis.”

Integrating Many Disciplines Under One Roof

These efforts along with those of outside partners will come together in the Huntley Bookstore building, a 23,000 square-foot facility, which has served as The Claremont Colleges’ central bookstore for 50 years. The School of Community & Global Health will serve as the anchor tenant.

“Real, substantial breakthroughs happen when people from many disciplines come together and collaborate. That’s the hallmark of our transdisciplinary philosophy,” Jessup explained, “and the purchase of the Huntley makes it possible to create such a space for that kind of engagement on our campus.”

San Manuel’s partnership with CGU builds on a relationship with the university dating to 2006 and the establishment of the university’s Tribal Administration Program. That program provides intensive training in areas of management as related to tribal governance and administration.

The Huntley building also will serve as that program’s home and the location of an envisioned tribal community governance and jurisdiction center focused on health, well-being, and other issues affecting Indian Country.

Improving Lives in the IE and Beyond

Plans for the center’s collaborative environment include bringing together university scholars, outside partners, and leaders of outreach programs focused on integrative health and advanced research to improve healthcare for vulnerable populations.

The focus won’t be on the Inland Empire alone but also extend to the L.A. Basin, which is home to the largest population of Native Americans found in an urban area of the U.S. The tribe understands the obstacles facing many of the region’s underserved communities because of its own past economic and health-related struggles.

“In our role as stewards of our ancestral lands, we support our neighboring communities, in addition to our Tribe. For generations, low-income communities and underserved populations have needed quality healthcare. Our gift is an investment in future healthier communities and one we are happy to make,” said San Manuel Tribal Chair Ken Ramirez.

Deron Marquez is the former San Manuel Chair, a CGU alumnus, and member of the university’s Board of Trustees. He believes that the center’s work will resonate far beyond Southern California.

“The types of health and well-being research that will be tackled by the center are relevant to the needs and situations of so many today. Its benefits will ripple out,” Marquez said. “To bring together the university’s pioneering approach to research with San Manuel’s philanthropic vision is truly exciting.”

For more about the Yuhaaviatam Center for Health Studies, visit info.cgu.edu/ychs/

Jessup is a professor and scholar of management information systems. His publications include coauthoring the third edition of Information Systems Today: Managing in the Digital World and “On the Future of the MIS Discipline: MIS as a Critical Strategic Driver,” published in the journal Database. In addition to his academic achievements, he has received numerous awards, including the 2018 CEO Award from the Council for Advancement and Support of Education (CASE) District VII.

The first in his family to graduate from college, Jessup was born and raised in Northern California. He holds a doctorate in Management and Organizational Behavior from the University of Arizona, Tucson, with a minor in Management Information Systems. He also holds an MBA and a bachelor’s degree in Information and Communication Studies, both from California State University, Chico.

Kenneth Ramirez was elected as chair of the San Manuel Band ofMission Indians in April 2020.

Chair Ramirez served five terms as Tribal Secretary on the San Manuel Business Committee prior to being elected chair. He also serves on the San Manuel Education Committee and actively promotes access to healthcare and education for all through his work with Loma Linda University Health and other nonprofit partners in the Inland Empire region. Ramirez leads the operating committee for First Nations Experience (FNX), the nation’s first Native American and World Indigenous Peoples television channel.

In his various leadership roles, Ramirez has been deeply committed to helping enhance the rights and meet the needs of all San Manuel tribal citizens as well as other members of Indian Country. Ramirez is a firm believer in the necessity of strategic philanthropy that creates new opportunities and partnerships in the region, including this one with Claremont Graduate University.

The San Manuel Band of Serrano Mission Indians is a federally recognized American Indian tribe located near the city of Highland, California. The Serrano clan is indigenous to the San Bernardino Valley, known today as the Inland Empire. The San Manuel Reservation was established in 1891 and recognized as a sovereign nation with the right of self-government. As an indigenous community, the San Manuel Band of Mission Indians’ origins and history stem from their relationship with the land and to all who share it. Its ancestors have handed down the tradition of expressing themselves through a culture of giving. As one of the largest employers in the Inland Empire, San Manuel is able to answer the call of Yawa’ (a Serrano word meaning “to act on one’s beliefs”) through partnerships with charitable organizations that make a difference in the lives of thousands of families across the country. It draws upon its history, knowledge, expertise, and cultural values to direct its philanthropic giving in the region, as well as to Native American causes nationwide. Visit www.SanManuel-nsn.gov.

About the Huntley Bookstore

Dedicated in 1969, the three-story building that has served as The Claremont Colleges’ centralbookstore for 50 years was made possible through a gift from the Earl W. Huntley Foundation. Thebuilding was designed by acclaimed architects A. Quincy Jones and Frederick Emmons, whose firmalso designed many private homes (including the home of actor Gary Cooper) and public buildings(including the Otis College of Art and Design, UCLA’s Charles E. Young Research Library, and St.Michael and All Angels Episcopal Church in Studio City) in Southern California.

The Huntley building’s design features—which include exposed timber post and beams as well as floor to-ceiling glass—are considered hallmarks of the mid-century modern style that integrates interiors with the outdoors. The building, at the heart of the Claremont Colleges, is an ideal location for the Yuhaaviatam Center for Health Studies at Claremont Graduate University. The historically important exterior will remain, and the remodeled interior will provide opportunities for discovery and collaboration.