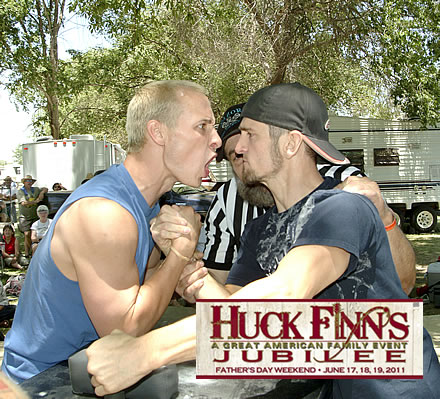 When you think of Huck Finn, it’s not likely you’d think of Arm Wrestling. However, if you know anything about the U.S. Arm Wrestling Association, you’ll know the California “Open” State Arm Wrestling Championships take place during Huck Finn’s Jubilee in Victorville, California each year.

Randy Sampias coordinates the tournament that returns Saturday, June 18th to Mojave Narrows Regional Park. Nearly 100 contenders are expected to vie for the California title.  “Because it’s an open tournament, both amateurs and professionals can compete, “Sampias says. “The separate weight classes also allow everyone to enter on his own level and come out a state champion.”

Bruce Way, who appeared in the 1989 arm wrestling movie “Over the Top” starring Sylvester Stallone,, was among past year’s competitors. “The term arm wrestling is highly inaccurate, “states Way. “Your whole body’s involved.”

There are twelve classes offered for the men’s competition. Bantam, light, middle, light-heavy, heavy and super heavy weight for men’ right and left hand categories are available. Women can compete in a separate open class. Anyone 18 years and older can compete and details are available by calling Sampias at (760) 868-6835.

Weigh-in for the competition starts at 9 a.m. during the Jubilee. The tournament begins at noon in the Shed World Arena at Mojave Narrows Regional Park. There is an entry fee of $25. All contestants will receive Souvenir T-shirt of the competition, and trophies are awarded through 3rd place. The arm wrestling competition promises plenty of action for participants and spectators alike. It is one of the many activities planned during the weekend at Huck Finn’s 35th Jubilee.