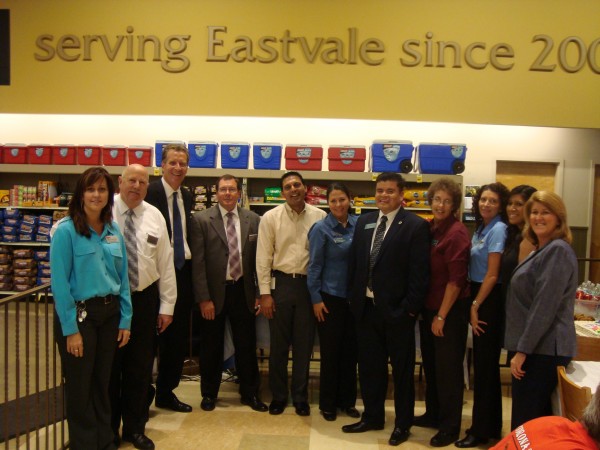 Eastvale, Calif – Last month, Eastvale City Council members joined Vons executives and
members of the Eastvale Chamber of Commerce to celebrate another “first” for the City of Eastvale.
The Vons grocery chain, which has operated one of its 278 stores on Hamner Avenue since 2004, recently
changed their in-store signage to reflect the city’s new name, making them the first major retailer to do so.
“Part of being the neighborhood grocery store, means being a good neighbor,” said Vons spokesman Carlos
Illingworth. “The new signage is just as much a point of pride for our employees, as it is for our customers.”
One Eastvale Vons customer, who was on hand for the festivities, was especially beaming with pride.
“The community worked so hard to become an incorporated City and we thank Vons for recognizing that by
acknowledging our new name and identity,” said Eastvale Mayor Jeff DeGrandpre.
He also thanked the Eastvale Chamber of Commerce for approaching the grocery chain with the idea.
“This falls under the charge that we’ve been given by the City to promote economic development and a ‘shop local’ mind-set,” said Eastvale Chamber of Commerce Executive Director Heidi Gallegos. “We’re proud to do our part to help build the Eastvale brand.”
About Vons
Vons is the largest division of Safeway, Inc., a Fortune 100 company and one of the largest food and drug retailers in North America, based on sales. Safeway operates 1,678 stores in the United States and western Canada, 278 of which are in southern California and southern Nevada that operate under the Vons and Pavilions banners. Vons supports a broad range of charitable and community programs and in 2011, donated more than $14 million to cancer research, schools, as well as programs and services that assist veterans and people with disabilities. For more information, please visit www.vons.com.