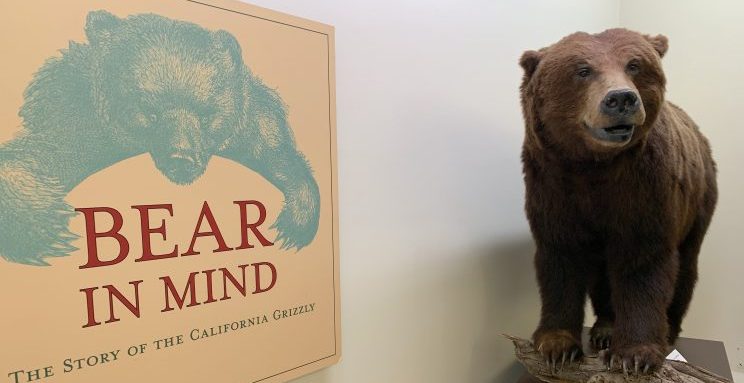 “Bear In Mind: The Story of the California Grizzly” offers historical view of the animal on our state flag

Over the centuries, the relationship that Californians have had with the grizzly bear is one of dualities – expressed in fear and fascination. Although extinct in the state since the early 20th century, the grizzly has long been a central character in California’s history. Illuminating the story of the grizzly is the exhibition “Bear In Mind: The Story of the California Grizzly” which opens at the San Bernardino County Museum today, Oct. 1, and runs through Nov 24.Scientists estimate that 10,000 grizzlies once lived in California, perhaps the densest population of brown bears on the continent. The California grizzly possessed characteristics that we hold dear: independence, adaptability, resourcefulness, intelligence, and strong maternal care. However, through increased human settlement, loss of habitat, and hunting, nature and development clashed, and the seeming incompatibility resulted in misguided, intolerant, and violent means of eradicating the animal in the state. By the early 1900s the California grizzly had vanished and could only be seen on the state flag. Although the loss of the California grizzly was a tragic lesson, we are not too late to save other threatened and endangered species.Today, California grizzly bears only exist in our imaginations as symbols of things desired and things lost. Since the mid-1800s, the grizzly has been used as an icon, advertiser and entertainer, making the image of the bear a familiar one to most people. Little physical evidence remains of the grizzly bears that once roamed California. It is through stories, artifacts, striking images, and hands-on activities that the “Bear In Mind” exhibition provides an in-depth look at the history and science of one of California’s most revered and feared animals.After viewing this special exhibit, viewers are invited to visit the museum’s permanent Hall of Biodiversity, which includes other animals that are endangered, now extinct, or thrive in our region. Many of the museum’s mammal collection were a donation from John C. Belcher, and a beautifully preserved, significant grizzly specimen from that collection of North American mammals is prominently featured at the entry to the Bear in Mind exhibit.The “Bear In Mind: The Story of the California Grizzly” exhibition is based on the Heyday Books publication, Bear in Mind: The California Grizzly by Susan Snyder, as well as The Bancroft Library exhibition of the same name.The “Bear In Mind: The Story of the California Grizzly” exhibition is produced and toured by Exhibit Envoy. The exhibition was developed in concert with The Bancroft Library, University of California, Berkeley and Heyday Books. Exhibit Envoy collaborates with California institutions to create and tour smaller, affordable, high quality exhibitions that enhance civic engagement and human understanding. This exhibition was supported by the William Randolph Hearst Foundation with additional funds from the Bank of the West.The San Bernardino County Museum’s exhibits of regional cultural and natural history and the Museum’s other exciting events and programs reflect the effort by the Board of Supervisors to achieve the San Bernardino County Wide Vision by celebrating arts, culture, and education in the county, creating quality of life for residents and visitors.The San Bernardino County Museum is at 2024 Orange Tree Lane, at the California Street exit from Interstate 10 in Redlands. The museum is open Tuesdays through Sundays from 9 a.m. to 5 p.m. General admission is $10 (adult), $8 (military or senior), $7 (student), and $5 (child aged 5 to 12). Children under five and Museum Association members are admitted free. Parking is free. For more information, visit http://www.sbcounty.gov/museum. The museum is accessible to persons with disabilities.