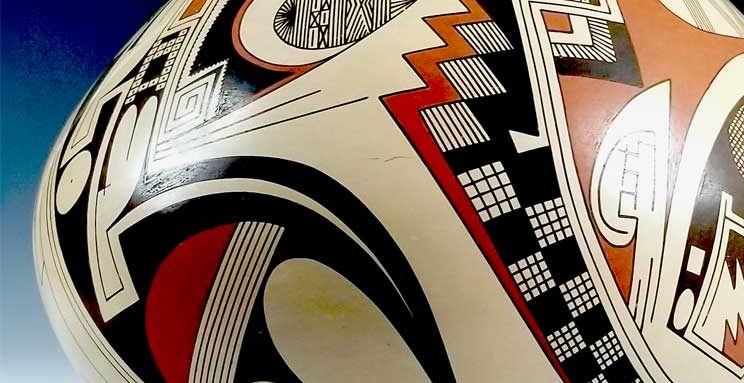 Pomona, Ca – In 1999, Mexico awarded Juan Quezada its highest honor for a living artist – the Premio Nacional de Ciencias y Artes – a capstone accomplishment for the self-taught an artist. Quezada’s work is inspired by the shards of Paquimé (or Casas Grandes) pottery that he found in the hills near his rural home. Remarkably, this inspiration led him to spend fifteen years empirically rediscovering and reinventing the entire ceramic production process based on his analyses of these shards. Juan Quezada: The Legend of Mata Ortiz brings together 70 works to chart Quezada’s meteoric artistic evolution, from imitative pueblo-styled functional bowls and effigies in the 1970s, to recent, painterly vessels juxtaposing swooping, curvilinear designs with tight, geometrical patterns – his unique contemporary reinterpretation of historical Paquimé iconography.

Growing up in the remote, rural village of Mata Ortiz, Quezada dropped out of school at a young age and worked in the hills collecting firewood to help support his family. These trips exposed Quezada to shards and fragments of pottery from the local Paquimé settlement, the largest and most significant Mogollon culture site from 1130-1450 CE (this period directly follows the well-known “Classic Mimbres Phase” of the Mogollon culture, est. 1050-1200 CE). Impassioned, and without guidance or assistance, Quezada spent the next 15 years experimentally developing his own methods to mimic the Paquimé ceramics.

In 1976, anthropologist Spencer MacCallum discovered a few of Quezada’s early pots in a store in Deming, New Mexico. MacCallum, overcoming obstacles of geography and language, sought out the artist in Mata Ortiz. Over the next 20 years, MacCallum and subsequent partners provided Quezada access to the fine arts community of the United States and Japan. This access had several positive outcomes: a decade of summer teaching in Idyllwild, California; dozens of museum exhibitions; numerous books; multiple documentaries; and exposure to the finest ceramists and academics of the time.

These experiences enriched Quezada and contributed to his rapid artistic evolution. Bill Miles, former professor of ceramics at New Mexico State University in Las Cruces, said he “[didn’t] know of an artist in any period in history, working in any medium, who in a comparable length of time had advanced his art as far as [Quezada] – and the more remarkable for being entirely self-directed.” Gone were the thick functional pots, and in their place arose elegant, ever-taller ollas (ceramic egg-shaped jars) covered in Quezada’s distinctive curvilinear designs. Transcending his early influences, Quezada’s works now reflected his own cultural motifs, iconography, and symbolism; a spiritual successor to the Paquimé now with his own, personal artistic vocabulary and aesthetic.

Throughout this evolution, Quezada never gave up his role as a master technical innovator, and never adopted any of the technical approaches he observed outside of Mata Ortiz. His large, thin-walled vessels are formed from locally-sourced clay that he digs, refines, and mixes. He illustrates each piece with proprietary paints mixed from local oxides using handmade human-hair brushes, and fires each piece individually. Artistic characteristics include “design repetition, maze construction, positive/negative reversal…and a non-banded layout” (Jan Bell, former Curator of Collections at Arizona State Museum at the University of Arizona). Professor Bill Gilbert of the University of New Mexico credits Quezada for innovatively “[treating] the entire olla, including the bottom, as a design field, sometimes superimposing designs so they take on a dynamic, transformative quality.”

In addition to being the most awarded and recognized ceramic artist in Chihuahua living today, he is also a steward of his community and the broadly-recognized grandfather of the 500+ artists considered part of the Mata Ortiz ceramic art movement. He still lives and works in Mata Ortiz, and is acknowledged as having transformed the fortunes and cultural significance of the town. As a result of the new industry and tourism, more educational opportunities are available for the children of Mata Ortiz and the future of the town looks bright.

This will be Juan Quezada’s final planned visit to the United States.About AMOCAThe American Museum of Ceramic Art was founded in 2003, in Pomona, California. The mission of the museum is to champion the art, history, creation, and technology of ceramics through exhibitions, collections, outreach, and studio programming.Museum HoursWednesday through Sunday, Noon – 5pmAdmissionGeneral $7, Student/Senior $5, Members & under 12 Free