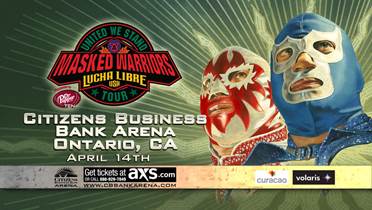 Bigger, badder, better—and even more popular. The Lucha Libre USA phenomenon, the immensely entertaining brand of wrestling born in Mexico and transplanted to the U.S., continues to grow, especially in the Hispanic community. Beginning on April 7, Lucha Libre USA: Masked Warriors will embark on a national “United We Stand” Tour and, this year, in part fueled by renewed interest in the immigration debate, the high-flying, epic battles between good and evil will have a political edge. The highly anticipated multi-city tour, with Dr Pepper as the official sponsor, is coming to Ontario on April 14, 2013 at the Citizens Business Bank Arena. Tickets are available at axs.com, CBBankArena.com, or at the venue Box Office.

The fight over the immigration issue spills into the ring with the larger-than-life, legendary Luchastars Blue Demon Jr. and his former nemesis Solar taking on their American counterparts RJ Brewer and his associates “The Right.” The matches pit Mexican and American wrestling styles as well as churning up conflicts over border crossings—a ‘hot button” issue in border states.

Brewer’s in-your-face, anti-illegal immigration stance made him the villain Lucha Libre USA’s large concentration of Latino fans love to hate. A vocal proponent of Arizona’s highly controversial SB 1070 law–the bill’s number is often stenciled on the back of his tights—Brewer was recently profiled on ABC’s Nightline. The ever-defiant Brewer has spawned a slew of copycats in other wrestling organizations but none has gained his notoriety or ability to rouse a crowd. His opponent Solar is one of the most revered of Mexico’s luchadores and his career was the subject of an award-winning PBS documentary.

Outside the ropes, Lucha Libre USA is fighting a different battle. In each of the cities on the United We Stand Tour, wrestlers are carrying an anti-bullying message to schools. They’re using their superstardom to convince mainly elementary school youngsters that bullying is unacceptable. “Hearing the message from their heroes really drives the point home,” says Alex Abrahantes, Lucha Libre USA’s Vice President. “The campaign is our way of giving back to the community.”

Lucha Libre USA has become well known for its interactive, fan and family-friendly spin on sports entertainment, encouraging its followers to attend events dressed up as their favorite Luchastar, awarding prizes for the best costume, loudest supporter and the most creative sign. Free preshow activities get the crowd energized and people who purchase VIP tickets have the opportunity to attend an exclusive meet and greet with the wrestlers.

“We see our events as a non-stop fan party,” says Lucha Libre USA’s CEO Steven Ship. “We want you to be totally engaged from the moment you walk in the door to the moment you leave.”

Lucha Libre USA: Masked Warriors will also partner with Univision Radio on promoting the event. Additional sponsors for portions of the tour include Volaris Airlines and Curacao, the west-coast based electronic and appliance retailers.

Lucha Libre USA is the only company in America dedicated entirely to Mexican pro wrestling. Almost a religion in Mexico, where it rivals soccer in attendance, lucha libre (free wrestling) boasts a 75-year history of colorful, fun-for-the-whole family entertainment. With over 50 million Hispanics living in the U.S. and a huge contingent of American wrestling fans, the spirited, action-packed spectacular is literally growing by leaps and bounds. Defying gravity with highly athletic, thoroughly exhilarating moves, the 2013 United We Stand Tour brings Mexican wresting to an entirely new level. http://luchalibreusa.com/

Citizens Business Bank Arena, built and owned by the City of Ontario, operated by AEG Facilities, includes 9,500 fixed seats with additional “portable” seating risers to accommodate capacities of 11,089 for concerts, 9,736 for ice hockey or arena football and 10,832 for basketball. The 225,000 square foot venue features 36 luxury suites located on two levels and a continuous concourse hosting a variety of refreshment stands, merchandise kiosks, a VIP club and other fan amenities. Citizens Business Bank Arena hosts ice hockey, arena football, and a variety of other sporting competitions, concerts, family shows, special events, conventions, school and community activities as well as private events. The Arena is home to Ontario Reign, an ECHL Premier AA Hockey Team. Citizens Business Bank Arena is the biggest and most modern arena within the Inland Empire, an area with over 4.1 million people. It is located in the City of Ontario, on a 37-acre parcel located between Haven Avenue and Milliken Avenue, Fourth Street and the I-10 Freeway. For more information visit: CBBankArena.com