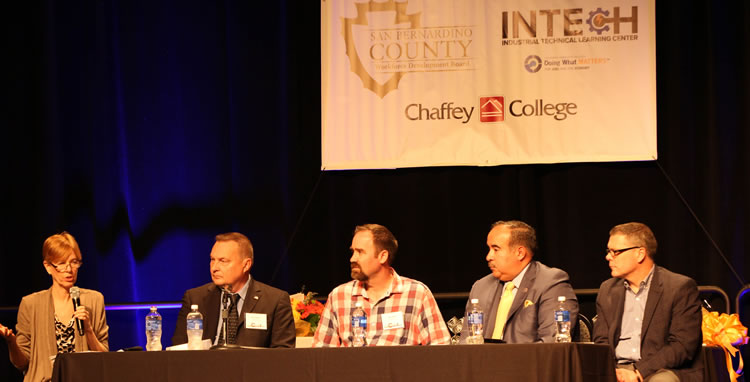 “The Manufacturers’ Summit is a wonderful opportunity to learn about economic development opportunities in the region,” said President and CEO of the Inland Empire Economic Partnership Paul Granillo. “Rebuilding our region’s manufacturing industry is absolutely vital to the Inland Empire’s growth. Together, we need to ensure the region’s manufacturers have the resources needed to compete and succeed.”

Of particular interest to attendees was an update from Washington, DC on what’s going to happen in regard to President Trump’s focus on increasing manufacturing and improving the climate for growth in the United States. Todd Boppell, chief operating officer at the National Association of Manufacturing (NAM), said, “There are five areas of focus at the federal government level, including:  infrastructure; tax reform; regulatory reform; trade; and healthcare reform.  There is a multiplier effect that will occur with increased manufacturing.  For every one new manufacturing job created, it will multiply four times by creating other new jobs in that community, by increasing the need for other goods and services. Manufacturing jobs transform into true value because a tangible item is made and sold.”

[ecko_quote source=”Dorothy Rothrock, President of the California Manufacturing and Technology Association”]It would be good to see state policy-makers visit more manufacturers, as this could be useful in Sacramento as they set regulations. California has a good education system and a skilled workforce that could help manufacturing grow in the state.[/ecko_quote]

Boppell went on to discuss how the Inland Empire (IE) plays a big role in the overall manufacturing picture, due to the regional warehouses, trucking industry and rail system to move goods.  “The IE is a critical part of the supply chain in Southern California, Asia and the nation,” he said.  “This region offers a less expensive place to operate, lower housing costs and a large workforce. The key points to remember are that economic growth through manufacturing is a top priority of the Trump administration, our trade policies need to be improved and to develop ways to be more competitive with foreign markets through innovative automation.” He said that to bring jobs back to the country, there needs to be better technology training with math, science and computer skills.

Giving the perspective from the State of California was Dorothy Rothrock, president of the California Manufacturers and Technology Association.  “The cost of doing business in California is high, due in large part to state regulations,” she said.  “It would be good to see state policy-makers visit more manufacturers, as this could be useful in Sacramento as they set regulations.  California has a good education system and a skilled workforce that could help manufacturing grow in the state.”

John McGloughlin, CEO of GuardSight, Inc, gave examples of the numerous ways computer hackers can obtain information about competitive companies and the public as a whole. He gave a live demonstration of how easy it is to hack into a company’s computer and operations systems.  “All companies should educate their employees on how to prevent computer hacking,” he said.  “The hackers can actually enter and control a manufacturer’s equipment operations and shut down equipment.  It is a serious threat today.”

“I want to congratulate the Manufacturers’ Council of the Inland Empire for offering fresh thinking on the opportunities and challenges, as well as providing the ideal environment to discuss 21st-century manufacturing in the inland region,” Granillo concluded.

For more information about the Manufacturers’ Council of the Inland Empire, please visit www.mfgcouncilie.com.