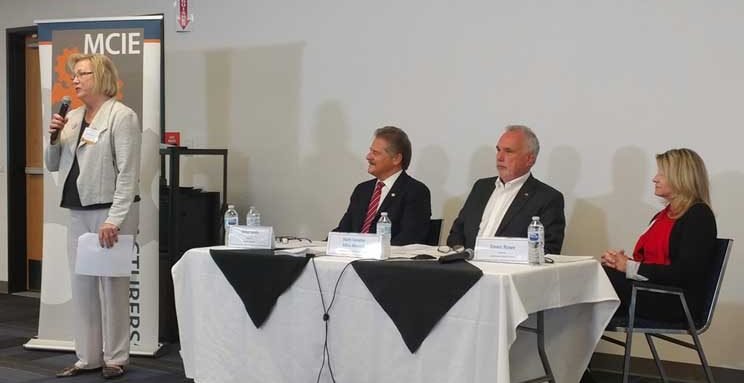 Fontana, CA – Manufacturers attending a Roundtable with State Senator Mike Morrell and San Bernardino County Supervisor Dawn Rowe, on Thursday, December 5th, expressed their frustrations with government regulations and discussed what they need to succeed and stay in California.

The Roundtable, presented by the Manufacturers’ Council of the Inland Empire (MCIE), was moderated by Mike Gallo, president of Kelly Space, and was co-sponsored by the InTech Training Center on the campus of California Steel Industries. Gallo opened the discussion on the topic of education and training for skilled workers.

Manufacturers, including Judy Lopez from Microdyne Plastics, and Brett Guge from California Steel, expressed the difficulty they have in hiring trained workers. Some attendees talked about their careers in manufacturing, and that training for those jobs had started with high school shop classes. They expressed the importance of bringing those classes back, and in changing the image of manufacturing as a “dirty job” to the new, exciting image of advanced manufacturing, with automation and robotics.

Senator Morrell presented data from a variety of sources, that shows that, for 15 years running, 500 CEOs from across the country, surveyed by Chief Executive Magazine, have ranked California the most challenging state in which to do business. He reported that the majority of employers treat their employees well and want them to prosper.

“If the manufacturing industry can’t succeed, it is difficult for any others to prosper,” said Morrell. “It is critical to have conversations to understand their challenges and find productive ways forward, especially in California where it is so hard to do business.”

Supervisor Rowe responded by saying, “At the county level, we’re working hard to provide our manufacturers with a skilled workforce to meet their hiring needs. While the number of San Bernardino County manufacturing jobs continues to increase, the percentage of our residents employed in that sector is declining. I’d like to see that trend line reversed, and it starts with establishing vocational training programs for our youth.”

Kurt Ponsor, president of Mindrum Precision in Rancho Cucamonga, cited both the cost of living and traffic issues as a barrier for success. He described how a great employee quit his job due to traffic and commute times. Many workers, who find the cost of housing too high locally, commute from the high desert region where they can afford to live. Regulations and bureaucratic delays were described that have driven up the cost of new housing, or caused cancellations in construction projects, making it more difficult for younger people to buy or rent housing within the Inland valley.

Over 30 manufacturers participated in the event which was also attended by top sponsors of the MCIE including the County of San Bernardino and Chaffey College representatives. The Intech Center staff offered a tour of their training facility after the completion of the program.

The Manufacturers’ Council of the Inland Empire (MCIE) supports education and workforce training on behalf of manufacturers throughout the region, offering expertise in a variety of topics including innovative workforce solutions.

Resources and problem-solving strategies, that are provided through MCIE membership, generate positive economic impacts to employers, employees, students (from grade school through college), and the community at large. For more information on membership or events, visit mfgcouncilie.com.