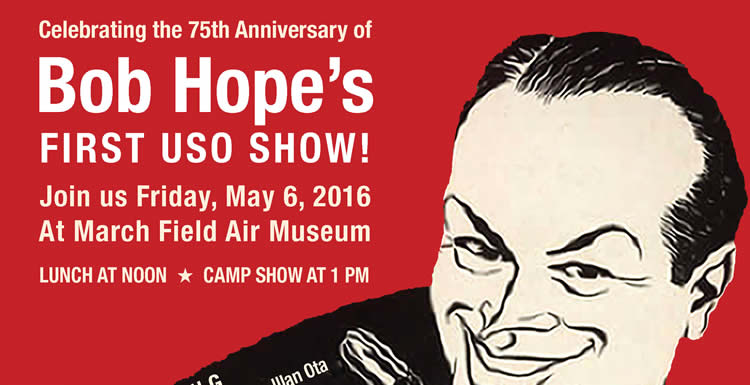 Riverside, CA – March Field Air Museum event on Friday, May 6, 2016. The museum will host a variety show reminiscent of those hosted by late entertainer Bob Hope. It is the 75th anniversary of Hope’s first USO show, a live radio broadcast to about 2,000 servicemen at March Field. 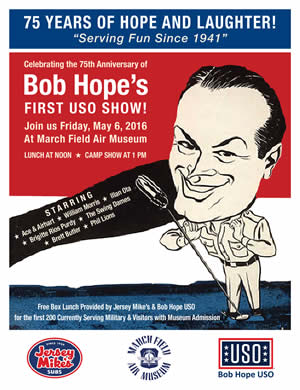 As part of the March Air Reserve Base campus, the museum strives to preserve and promote the 98-year base legacy.

“Few people realize that decades of Bob Hope camp shows on military bases started right here near Riverside,” said museum board President Jamil Dada. “The first one was such a morale boost to the troops that Mr. Hope and his radio cast began broadcasting from military bases regularly.” The tradition continued with USO sponsorship from 1941 to 1991.

To commemorate the first show, comics and singers will perform at the museum from 1-2 p.m. May 6. They are donating their time to benefit the military and the museum. The show will be preceded by a light lunch at noon. It is free with regular museum admission ($10 for adults) and lunch will be included for the first 200 guests. Current military personnel will get in free that day.

“As a museum, we like to remind people of how entertainment looked before there was television, electronic gaming, social media, and a phone in every pocket,” Dada said. “This was a time in our history when servicemen had few reminders of home. Bob Hope was a connection with happier times, and life outside the military.”

March Field was established in 1918, long before the U.S. Air Force was created in 1947. It was called March Air Force Base for 49 years, and renamed March Air Reserve Base in 1996.

The organization Bob Hope USO Ontario will be an event sponsor. The camp show will be coordinated by Bob Airhart, former performer with Bob Hope Hollywood USO Mobile Shows, who may be reached through March Field Air Museum.  The museum is open Tuesdays through Sundays, and is located just east of Interstate 215 at Van Buren Boulevard. The phone number is 951-902-5949.