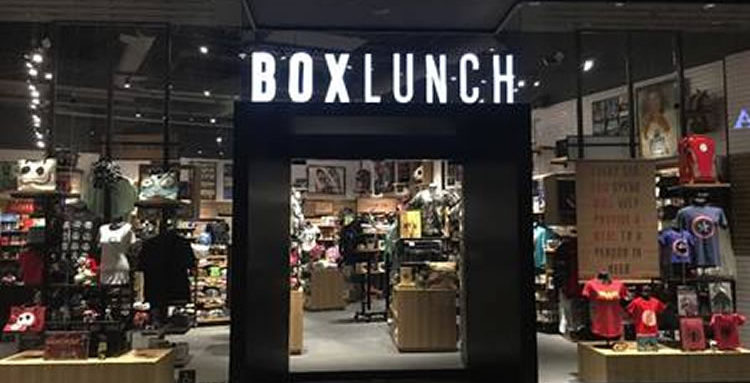 Montclair, CA – BoxLunch, a pop culture gift store with a cause, announces that it will open its newest location in Montclair, CA on Wednesday, September 20th at Montclair Place. BoxLunch offers a thoughtfully curated selection of the world’s most popular licensed shirts, accessories, collectibles, beauty, home goods and gift and novelty merchandise for everyone from the most dedicated fan to the more casual pop culture enthusiast. The new store will celebrate its grand opening weekend, Saturday, September 23rd – Sunday, September 24th from 12-4PM, with DJs spinning live music, in-store giveaways and trivia games.

To fulfill its civic mission of “Get Some. Give Back”, BoxLunch will donate one meal* to Feeding America® for every $10 spent in-store or online. BoxLunch is proud to support national hunger-relief efforts as well as local efforts through Feeding America’s nationwide network of food banks, including The Riverside Feeding America serving San Bernadino Counties, which will directly receive a percentage of the donations raised at Montclair Place BoxLunch store.

“We are thrilled to bring BoxLunch to the San Bernadino community. Our mission is simple, sell the best product and use our business to inspire and implement solutions to help fight the hunger crisis on both a local and national level,” said Robert Thomsen, Vice President, General Manager of Merchandising and Marketing, BoxLunch.

“BoxLunch retail storefronts across the country provide a way for the general public to be exposed to hunger relief and offer a means for their customers to easily give back through their purchases. This support has already translated into more than eight million meals donated to provide hope to families facing hunger in the United States and we are honored to have been selected as their charity of choice,” said Nancy Curby, Senior Vice President of Corporate Partnerships and Operations, Feeding America.

BoxLunch is a specialty retailer offering a curated collection of licensed pop culture merchandise. With every $10 spent across the retailers’ themed product offering of apparel, accessories, home goods, gift and novelty, and collectibles BoxLunch will provide a meal to a person in need through its philanthropic partnerships. To join the movement and help in the fight against hunger visit BoxLunch in-store or online at www.boxlunch.com to learn more on how you can get involved in your local community. BoxLunch is headquartered in CA and currently operates over 60 stores throughout the US. For more information please visit our e-commerce website and Facebook or follow us on Twitter and Instagram.

Feeding America is a nationwide network of 200 food banks that leads the fight against hunger in the United States. Together, we provide food to more than 46 million people through 60,000 food pantries and meal programs in communities across America. Feeding America also supports programs that improve food security among the people we serve; educates the public about the problem of hunger; and advocates for legislation that protects people from going hungry. Individuals, charities, businesses and government all have a role in ending hunger. Donate. Volunteer. Advocate. Educate.  Together we can solve hunger. Visit www.feedingamerica.org, find us on Facebook or follow us on Twitter.