Water department officials are dumping millions of black plastic balls into the Los Angeles drinking supply, making the surface of the city’s reservoirs look like a ball pit at the local indoor playground.

But these balls are not for child’s play; in fact, the Los Angeles Department of Water and Power (LADWP) are relying on the four-inch polyethylene balls, manufactured by Microdyne Plastics, Inc. in Colton, California to protect their water reservoirs from developing a potentially harmful carcinogen called bromade.

Called shade balls or “conservation balls,” these plastic orbs shield the exposed outdoor reservoirs from California’s often intense sunlight, which creates bromade when exposed to the mixture of bromide naturally found in groundwater and the chlorine used to disinfect drinking water.Conservation balls have been used with other purposes including keeping birds out of water near airport runways, but this is the first instance that they have been used to protect drinking water. LADWP, the nation’s largest utility serving 4 million customers, pioneered their use in 2008 after high levels of bromade was discovered in the city’s Silver Lake and Ivanhoe reservoirs. Dr. Brian White, the water utility’s now-retired research biologist, has been given the credit for suggesting the idea.
The LADWP immediately began draining the water from the reservoirs and placing thousands of shade balls until more permanent measures could be taken to properly decontaminate the water supply. Being resonably priced, shade balls are the utility’s low cost no maintenance answer to a serious problem.

Melinda Rho, the LADWP’s manager of regulatory affairs, says that shade balls have proven to be useful for solving other contamination problems faced by the exposed reservoirs.”They cut down the amount of light, which reduces the amount of algae that can grow, and that reduces the use of chlorine needed to control algae. They also keep the seagulls and migratory birds off so those are all good reasons to use them,” Rho said.

The U.S. Environmental Protection Agency requires all uncovered reservoirs be covered, replaced with tanks, or treated to remove contaminants, such as protozoa and bacteria. To comply with federal regulations, the LADWP will complete a $230 million construction project to replace Silver Lake and Ivanhoe with a covered concrete tank and treat water at the outlet of the L.A. Reservoir.

While the balls placed into the Silver Lake and Ivanhoe reservoirs are temporary, those floating on the surface of the will likely remain there permanently. As the largest reservoir controlled by the LADWP, the L.A. Reservoir will require 80 million plastic balls to blanket its 176-acre surface. To complete the $2.4 million project, the LADWP is contracting with Microdyne’s distributor, Xavier LLC, along with other vendors to manufacture the balls.

To fill the big order Microdyne Plastics, Inc. uses a team of engineers with decades of industry experience to execute the project. At their plant located in the Inland Empire of Southern California the hollow plastic balls are manufactured through a series of intricate processes that ensure the design is engineered with the highest precision. Through a process called blow molding, black plastic resin is forced with air to create a four inch orb.

Microdyne Plastics Inc. then leaves a small hole on the surface of the ball to fill it with water. A separate process called injection molding creates a perfectly fitted plug to close and seal the hole. Each ball is then inspected to ensure the highest quality then packaged in large bags which can be easily spilled into the reservoir upon arrival. Microdyne will manufacture 6.4 million shade balls by the end of 2014.

The LADWP’s innovative use of the polyethylene balls has sparked interest from other water conscientious industries desiring to reap the benefits of their use. Mt. Baldy Ski Resort is applying the balls to reduce their snow making costs by protecting the water purchased for the process. Because the balls also reduce water evaporation, the resort is able to save thousands of dollars by purchasing less water. As new uses are discovered, it is possible there will be more sightings of the black orbs floating upon water surfaces in the future 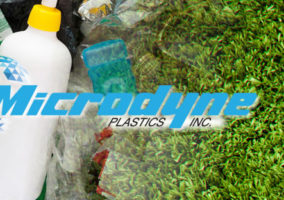 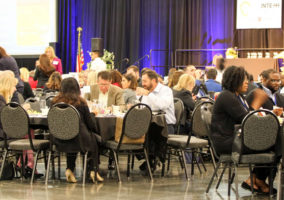 Manufacturing in Schools to be Discussed at Inland Empire Meeting