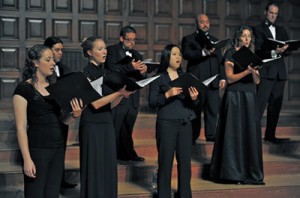 The Redlands Chamber Music Society presents a concert on February 19th featuring the Redlands Choral Artists under the direction of Jean-Sébastien Vallée. Among the composers represented in the choir’s Sunday afternoon performance are Mozart, Haydn, Mendelssohn, Brahms and Bach.

The concert is at 4 p.m. at Watchorn Hall, Frederic Loewe Performance Hall at the University of Redlands, 1200 Colton Avenue. Tickets are $20. Admission for any music student is $5.

Dedicated to the highest quality of musical performance, Redlands Choral Artists seeks to enrich Inland Empire with exceptional interpretations of traditional and innovative chamber choral works. Director Vallée has assembled a group of 17 singers from across California marked by virtuosity, versatility, and a commitment to excellence.  It is their mission to educate and delight audiences through music spanning nearly six centuries, and to cultivate an intimate appreciation of chamber music.

The Redlands Chamber Music Society will continue its season on March 18 with the Emerging Artist Concert featuring prize-winning concert pianist, Jingfu Peng, a sophomore at Redlands High School and Grand Prize winner in the 2011 Glendale Piano Competition and Victoria Jones, flute, a University of Redlands senior, who has a student substitute position with the Redlands Symphony.

For ticket, donations or other information, contact Mark Braunstein, executive director of the Redlands Chamber Music Society at (909) 327-6611 or board member Adriane Gram at (909) 798-9253.


Active conductor, scholar, clinician, and adjudicator, Dr. Jean-Sébastien Vallée is one of the  nation’s leading new figures in the world of choral music. Dr. Vallée is Director of Choral Studies at California State University, Los Angeles where he teaches conducting at both the undergratudate and graduate levels in addition to conducting the University’s three choral ensembles. Prior to his appointment at CSULA,  Jean-Sébastien was Assistant Professor of Choral Studies at the University of Redlands.

Jean-Sébastien has conducted more than thirty ensembles in Canada and the United States including the Canada National Youth Choir and the Vancouver Chamber Choir. Dr. Vallée’s ensembles have received the highest acclaim – they have been invited to perform for the California Music Educators Association state conferences, and the University of Redlands Chapel Singers received three awards at the San Luis Obispo International Choral Festival in 2010.

In addition to his interest in choral, operatic, and orchestra music, Vallée is an advocate of contemporary music, making one of his priorities to premiere and commission works by young composers and program rarely performed repertoire.

As a scholar, Dr. Vallée has presented his work on Renaissance French music at the national convention of the American Choral Directors Association in Oklahoma City, and at Festival 500 in Newfoundland, Canada. Vallée has also been invited to present his research on Michael Tippett’s oratorical works at the 2011 National ACDA convention in Chicago. In January 2012, Dr. Vallée will be presenting his research on Micheal Tippett’s A Child of Our Time at the Hawaii International Conference on Arts and Humanities.

Dr. Vallée is also Musical and Artistic Director of the Mountainside Master Chorale, and Director of Music at  Glendale City Church.