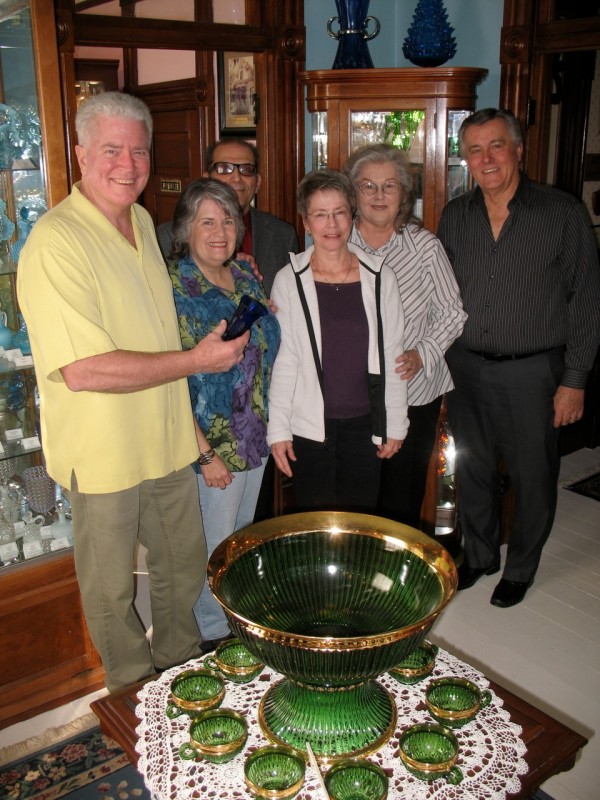 “It’s been more than a decade, since I talked on the phone to Dixie Huckabee, founder of the museum,” recalled Director Frank Herendeen. At the time of the phone call, Herendeen was editor of the Redlands Area Historical Society’s Newsletter. “I remember reading an article in the newspaper that the Historical Glass Museum was planning to move the museum to Yucaipa. With the approval of the RAHS Board, my wife, Rosemary and I talked to the Museum Board promising to lend our support to the Glass Museum if they would agree to stay in Redlands.

After that meeting the Herendeen’s became members of the Historical Glass Museum Foundation board, becoming active in doing their part to make the museum what it is today. When the term of the then HGMF President’s term expired, Mr. Herendeen was elected President/Director.

During Herendeen’s term in office, a lot has happened, and more than 6,000 pieces of beautiful American glassware has been donated to the museum’s collection. Donations have come from as far as the East Coast to our quaint West Coast museum.

In addition, the museum has been restored and painted on the inside by Joe and Barbara Soelter, and painted on the outside by Sandie and Bill Green. The 1905 building has been earthquake retrofitted, and all of the ceiling lights have been replaced with vintage glass hanging lamps. An additional room for display of glass has been added by turning a storeroom into ‘Yesterday’s Kitchen’.

The museum has been fortunate to have Huell Howser televise the museum on two occasions. This unique, little museum, in Redlands, California, now has one of the largest collections world-wide of American manufactured glass. Nearly every American maker of household glassware is represented in the museums glass collection. In the last ten years, twenty-six custom built, locked, lighted, and mirrored display cases have been added to highlight our growing collection of donated glass.

One of Herendeen’s memorable moments was saving the 1888 Victorian two-story Andersen house from being burned as a training exercise for the Redlands Fire Department. The historic home was moved, restored, and finally sold, making enough profit to do all the above mentioned updates to the museum.

Take a virtual of the glass museum at http://glassmuseums.com.

Since 1985 the glass museum has been a unique tourist attraction to Redlands, being the only museum of American glassware west of the Mississippi River. The museum has always been located at 1157 N. Orange Street, for blocks north of the I-10.

Herendeen, Chairman of Redlands Cultural Arts Commission, has been working with the City of Redlands for nearly three years to get approval to install four directional signs directing tourist to the Glass Museum. Now that the approval is in its final stage, Herendeen is hearing rumors the new Board of Directors is planning to move the Historical Glass Museum to another city.

Herendeen sent an email to the new acting president Bill Brakemeyer, asking if he would like the contact information to complete the Directional Sign installation with the City of Redlands. Brakemeyer responded with, “Yes, I need to follow through on the work you have done for those signs that lead people to the museum”. Brakemeyer, however, told a museum docent that the board plans to find a new location for the museum. The recently retired board members are very upset with the possibility of Redlands losing a tourist treasure to a surrounding city.