Riverside: Celebrate the 92nd Anniversary of the 19th Amendment at Riverside Art Museum 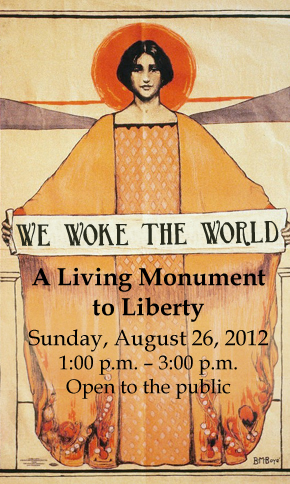 Riverside, CA — The Riverside Art Museum(RAM) announces a unique opportunity to help build a “living monument” to the many faces of liberty, called We Woke The World. We Woke The World invites the public to celebrate liberty and women’s early historic and courageous efforts to claim their right to vote.

This event, organized by Ari Kletzky, is part of the current exhibition, You Are Breathing In It! Alternative Art Practices, curated by Karla Diaz of Slanguage Studios. The exhibition runs from July 14 to September 22, 2012, and the We Woke The World event is on Sunday, August 26, from 1:00 p.m. – 3:00 p.m.

The celebration includes a sing-a-long and recording of a forgotten 1917 Suffragist-era song and a historical paper hat-making activity. The song marks a pivotal moment in women’s early history of liberty. It also tells a unique story about the women’s suffrage movement, which is the first successful nonviolent campaign for social change in U.S. history. In addition to songs, women used other tactics, such as wearing newspaper hats at parades. In celebrating this day, we will also make newspaper hats that speak to the history of liberty.

“We hope the community will come out to learn more about the suffragist movement and celebrate the pioneers who made it possible for women in this country to vote,” says RAM Executive Director Drew Oberjuerge. “During these times of political divisions and posturing, it is incredibly encouraging to remember what people can accomplish when they work together for positive change.”

“This historic sing-a-long is a forgotten national treasure that speaks to the importance of participatory liberty, including non-violence, assembly, petitioning, and voting,” says Ari Kletzky, We Woke The World’s organizer. “Women’s vision, courage, and perseverance for participatory liberty demonstrates that the foundation of democratic community and individual rights is the liberty for all citizens to participate equally in decisions about the common good since those who participate create the laws we all must live by.”

The concept of a living monument represents a new paradigm in how we remember history. Through a combination of various elements, such as events like this recorded sing-along which we hope will be a base for others to add their voices, a website, and other activities that stimulate knowledge and imagination, the dynamic history of liberty and its context becomes immediate and relevant to contemporary challenges and dreams. This is a shift from the traditional approach of erecting a monolithic, rigid object (which often finds itself neglected, forgotten, and/or knocked down or destroyed) to an evolving, flexible development that involves people giving history and ideas a voice, indeed giving it a life of its own. 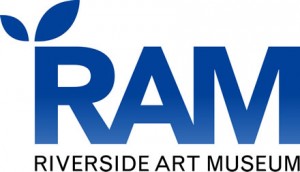 If you are interested in volunteering or would be interested in speaking at the event about your experiences regarding the suffragist movement and what the right to vote means to you, please contact Exhibition Liaison Kathryn Poindexter at (951) 684-7111 ext. 307 or at: kpoindexter@riversideartmuseum.org for more information. More information on the exhibition and other free events are at: www.riversideartmuseum.org/YABII.