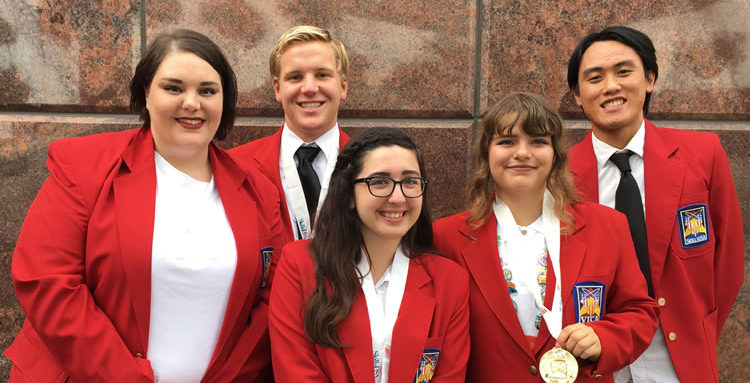 Two of the medals were gold, while the other was bronze. In all, five students competed in the competition which is an accumulation of regional and state competitions. With two gold medal winners, the Applied Digital Media program has produced a gold-medal winning student in seven of the last nine competitions. Megan Moore and Cassandra Caldwell kept the gold-winning streak alive as they each won their respective competitions. Moore, a graduate of Ocean View High School in Huntington Beach, won the Graphic Imaging Sublimation, with Caldwell, a graduate of Jurupa Hills High School in Fontana, winning the gold medal for Photography, which was a first for the photography program.

“I am very proud of our CTE students who have volunteered their time and effort to compete in SkillsUSA on behalf of the program,” Patrick Scullin, associate professor, Applied Digital Media, said. “The students dedicated themselves to the team and to mastering their contest area during fall and spring semester. This required personal initiative and many extra hours of practice and study including competing at regionals and state and culminating in a weeklong trip to the national competition.”

The SkillsUSA Championships in Kentucky are competitive events, showcasing the best career and technical education students in the nation. The event, which is held at the Kentucky Events Center, occupies a space equivalent to 16 football fields. Nearly 1,500 judges and contest organizers from labor and management make the national event possible. SkillsUSA is the largest demonstration career annual competition in the nation. Over 300,000 high school and college-level students participate in regional, state and national competitions yearly. The philosophy of the national competition is to reward students for excellence, to involve industry in directly evaluating student performance, and to keep training relevant to employers’ needs.

“This year’s SkillsUSA national competition experience was memorable, I challenged myself and met amazing people in my field,” Caldwell said. “By participating this year, I learned a lot about myself and my photography.

“I have a clearer understanding of how far I can push myself to be successful and efficient in my career that comes from participating in SkillsUSA. During the competition, I told many people about RCC and the photography program, which I feel has prepared me for the industry that awaits me.”

Danielle Long, a graduate of ML King High School in Riverside, won a bronze medal in Graphic Communications. Dustin Balugay (Advertising Design), a graduate of Holy Trinity High School in Ontario, Canada, and Kristina LoVerso (T-shirt Design) also competed in the national competition. To be able to compete in the national competition students had to have won a gold medal at their respective state tournament.