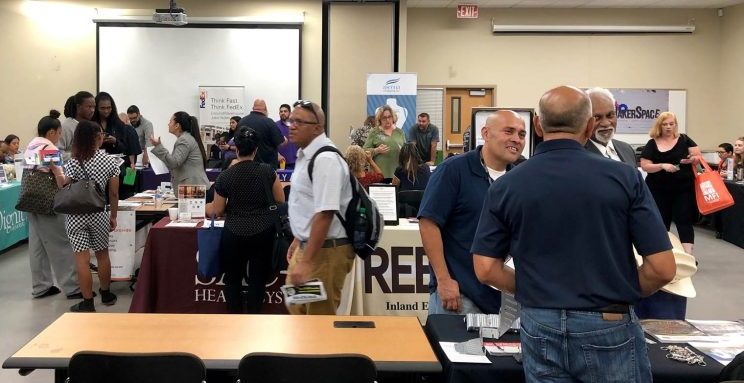 Life is all about second chances. Fail. Learn. Take a new direction. That philosophy is at the heart of a Job & Community Resource Fair held Sept. 18 by the San Bernardino Community College District for people who were formerly incarcerated.

“You have decided to change, and all the people around you support you,” said Karen Thacker, a Southern California Regional Administrator for the California Department of Corrections and Rehabilitation, one of several co-sponsors of the event. “This can make an impact on many generations.”

The room buzzed with questions as job seekers learned how to apply for full and part-time jobs in environmental conservation, machining, manufacturing, hospitality, retail, logistics, and other fields. Potential employers, including Goodwill, Stater Bros. Markets, FedEx, Ascena Retail Group, Geodis and the U.S. Census Bureau, offered free pens and reusable bags to draw in job seekers who are not necessarily used to having job fairs designed for them.

San Bernardino Community College District Chancellor Bruce Baron thanked the employers in the room. “The kindness you show to our reentry population will be rewarded with employees who are grateful and who will work very hard to go beyond the call of duty,” Baron said.

Jason Reggie, 41, knows quite a bit about being weighed down by a past conviction. He spent a total of seven years in prison for drunk driving and other offenses. Released four months ago, he said finding work with a conviction on your record is “nearly impossible.” But at this job fair? He feels welcome. “I like it because everybody here knows we are on parole,” he said.

A father of three, Reggie said he is looking for steady work to get his driver’s license back, buy a car and contribute to supporting his family. Eventually, he dreams of working to build the structure of skyscrapers as a member of the ironworkers union. It pays well and he doesn’t mind the danger. In fact, he said, the danger is one of the attractions.

“My previous choices got me in prison, and I had to change the way I thought and acted to keep my freedom,” Reggie said. He grew up in Baldwin Park and a friend from childhood, 40-year-old Jose Jimenez, Jr., suggested ironwork because it is a “parole-friendly” environment for people who like the adrenaline rush of working on the beams and girders that hold up skyscrapers.

“I worked on Star Wars: Galaxy’s Edge at Disneyland,” said Jimenez proudly, sporting facial tattoos that made his face look like a happy cartoon character. Ironworkers, he said, also are tattoo-friendly. A resident of Fontana, Jimenez said he looks forward to taking his children to Disneyland and pointing out his handiwork. “Your hands are what makes you an ironworker,” he said. “That and being smart.”

Being well-groomed helps too, so some job seekers stopped at a booth near the entrance for quick haircut or a shave from student barbers. Barber instructor Richard Ortiz said hair care is a field with a projected 15 percent growth rate, and they are always looking for a chance to practice the craft.

Other booths offered housing assistance, charge reduction, advocacy for children, and help to get child support. Partners in the job fair include the City of San Bernardino, Goodwill Southern California, the San Bernardino Police Department, San Bernardino County 2-1-1, GEO and the California Department of Corrections and Rehabilitation.

To add to the festive environment, Juan Nevares, 26, demonstrated high-end 3D printers purchased for the Innovation & Entrepreneurship Accelerator at the San Bernardino Community College District. While he promoted an upcoming Manufacturing Day and open house on Oct. 15, he said he wants to inspire people to have an attitude of making things themselves, an attitude of creativity and perseverance. There is no need to sit in a lecture, he said. “You decide how you accomplish the goal. If this didn’t work out, let’s design it differently.” It is a lesson that job seekers at this particular fair have taken to heart.

San Bernardino Community College District serves 18,000 students through Crafton Hills College and San Bernardino Valley College. For nearly 100 years, our colleges have provided access to affordable, award-winning education and career training programs for the residents of Big Bear, Bloomington, Calimesa, Colton, Fontana, Grand Terrace, Highland, Lake Arrowhead, Loma Linda, Redlands, Rialto, San Bernardino, and Yucaipa. We educate the health care professionals that serve our medical needs, veterans who have served our country, police and firefighters who keep us safe, and skilled workers who fuel our economy. Beyond our campuses, we inform and inspire learners of all ages through Empire KVCR, the PBS and NPR affiliate station for Inland Southern California on TV channel 24 and 91.9 FM. www.sbccd.edu 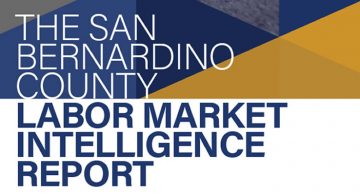