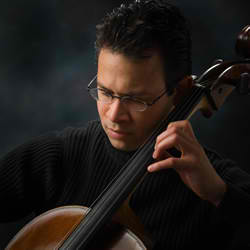 Acclaimed cellist Jesús A. Morales will debut with the San Bernardino Symphony in “Orchestral Treasures,” Mar. 10.

Frank Fetta, Music Director and Conductor of the Redlands Bowl Music Festival Symphony Orchestra, will guest conduct for the performance. His engaging, interactive style was described by The Los Angeles Times as full of, “passion, wit, admirable theatrical sensitivity and an interpretative individuality often extraordinarily mesmerizing.

Joining the Symphony in his debut performance will be acclaimed cellist Jesús A. Morales, member of the Dalí String Quartet and Professor of Cello at the Elite Strings Program in Lansdale, Penn. As a soloist he has been hailed “in a category above many cellists of today….inspired and captivating,” New York Concert Review; and Caribbean Business declares, “he is already talked about as a potential soloist of international stature.”

The opening piece is the Mozart’s “Overture to the Marriage of Figaro.” A light and airy offering, it sets the tone for the comedic opera, and, in this remarkable concert, takes the audience down a joyous path leading to the amazing contrast of Elgar’s glorious concerto.Full of lush and wonderful passages, the Cello Concerto in e minor, op. 85 is probably the tour de force piece that cellists play. Written at end of WWI, it represents the composer’s reflection on the war.

Imagine Hamlet opening with the prince on stage saying, ‘to be or not to be’ with no scenery in place… similarly, the cello starts alone, setting the mood and tempo before the orchestra begins.

Presented in four movements, Elgar described the Concerto’s resolution as “grief being released from the world.” But the listener will leave remembering the ability and the emotion of the cellist.

The final piece, Shostakovich’s Symphony No. 9 in E-Flat Major, op. 70, brings a similar genre of feeling and emotion. Written during Stalin’s dictatorship, the piece is highly thematic of the Russian view of the world; in fact, it was to be a celebration of the Russian triumph over the Nazis. Completed in 1945, the Symphony is joyous, exuberant, and, as Shostakovich described, “represents the joy of the Russian people.”

Special recognition will be given at the concert to students who are members of the San Bernardino City Unified School District honors orchestra. The Guild’s Musicale, featuring Jesus Morales, will be held the Friday evening before the concert.

Tickets for Orchestral Treasures start at just $10 for students and are available at www.sanbrnardinosymphony.org or call the San Bernardino Symphony office at (909) 381-5388 for tickets or more information.