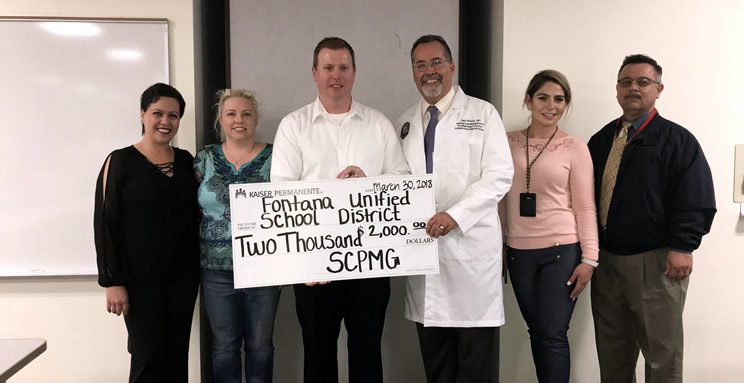 “What makes Southern California Permanente Medical Group physicians so amazing is the value they put on the doctor-patient relationship. They understand that building trust is just as important as providing excellent care,” said, Dr. Timothy Jenkins, Area Medical Director and Chief of Staff. “These donations are opportunities for our physicians to show their compassion and unwavering commitment to the kids in the communities they serve”.

Check presentations were made at the Doctors Day Luncheons on Friday, March 30, with many SCPMG physicians in attendance. The donation and Chaffey Joint USD was presented at the Kaiser Permanente Ontario Medical Center. The donation to Fontana Unified School District was presented at the Kaiser Permanente Fontana Medical Center.

This is the fifth year in a row that SCPMG physicians in San Bernardino County have made major donations on Doctors Day.

National Doctors Day was created to honor and show appreciation for doctors. The first Doctors Day observance was on March 30, 1933. It was started by Eudora Brown Almond, wife of Dr. Charles B. Almond, of Winder, Georgia. The day marks the anniversary of the first use of general anesthesia in surgery. It was designated as National Doctors Day by President George Bush in 1991, and is celebrated each year on March 30.