“The Sound of Music” opens at The Candlelight Pavilion 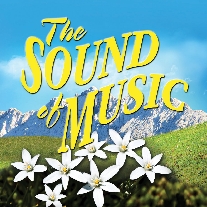 CLAREMONT, CA – The Candlelight Pavilion is proud to bring back what is undoubtedly the most beloved musical of all time, Rodgers and Hammerstein’s The Sound of Music. The story is a timeless one: Maria joins the von Trapp family as a governess, only to find that Captain von Trapp’s militaristic ways have left his seven children sorely lacking in warmth and love. While Maria teaches the children to sing and play, she begins to become the mother they were so sorely lacking, and the Captain begins to see her in an entirely different light. Based on the memoir of Maria von Trapp, The Story of the Trapp Family Singers, many songs from the musical have become standards, such as “Edelweiss,” “My Favorite Things,” “Climb Ev’ry Mountain,” “Do-Re-Mi,” and the title song, “The Sound of Music.”

The idea behind The Sound of Music came after Vincent Donehue, director and friend of Mary Martin, saw the 1956 German film named The Trapp Family. Donehue felt that Maria would be a perfect role for Mary Martin. The Sound of Music was originally set to be a stage play; however the producers later changed their minds and decided to collaborate with Rodgers and Hammerstein to create the musical. Details were changed from history to create the storyline based on the Von Trapp Family who left Austria to live in the United States. The 1959 Broadway production of The Sound of Music starred Mary Martin and Theodore Bikel. The most famous adaptation of the story was the 1965 film starring Julie Andrews and Christopher Plummer which would win five Academy Awards that year. The Sound of Music was the last musical written by Rodgers and Hammerstein.

The Sound of Music opens February 8th at the Candlelight Pavilion Dinner Theater. Tickets are available by calling (909) 626-1254, ext 1. Regular ticket prices range from $53-$68 which includes both dinner and show. The Candlelight Pavilion is proud to announce its flexible payment plans to all Season ticket holders; save 10% on season tickets when you book as few as four shows.   For more information regarding the 2013 season line-up and ticketing, please visit us online at www.thecpdt.com.

$53-$68. $25 for children 12 and under. Ticket price includes meal, show and sales tax. Appetizers, desserts, beverages and waiter’s gratuity are additional within the theater.