Treasures of the Americas: A Gift for the Whole Family 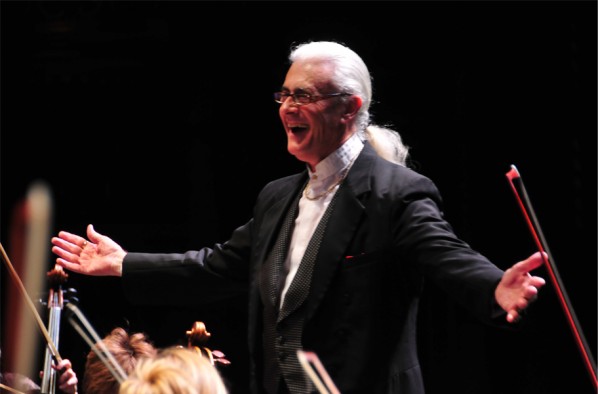 The San Bernardino Symphony is offering a post-holiday gift everyone in the family will enjoy. The Symphony’s annual afternoon family concert, Treasures of the Americas, will surely be a diverse and delightful trip through the sonic landscape of the western hemisphere.

Designed to allow families to extend the warmth of the holiday into the new year, this is the third offering in the Symphony’s 2012-13 season of Musical Destinations and will be presented on January 13, 2013 at 3:00 p.m. at the California Theatre of the Performing Arts in San Bernardino.

“Our concept was to give an overview of some fun and interesting music from both North and South America,” said San Bernardino Symphony Maestro Frank Fetta. “These are relatively short pieces brought together in an eclectic mix of popular and folk-oriented music presented in a classical context.”

Not only will attendees enjoy delightful selections from Copland, Kubik, Revueltas, and others, the Family Music Fair to be held before the concert from 12:30 to 2:30 p.m. is being reprised in this very special family event. The Fair will include an instrument petting zoo, musical activity booths and student ensemble performances.

“We are very excited to offer the Family Music Fair once again,” said Maestro Fetta. “Children will be able to interact with the musicians and even try out an instrument or two.”

The orchestral concert begins with “Hoe-Down” from Copland’s “Rodeo” With violin notes reminiscent of both country fiddle and Mariachi, this piece was written in 1942 for choreographer Agnes de Mille. The scenario tells the story of a young woman, accomplished in all the skills of a cowpoke, who hopes to attract the attentions of the head wrangler on a ranch. While he is unimpressed by her skill, he eventually succumbs to her charms when she trades her cowboy duds for a dress at the rodeo dance.

Kubik’s whimsical ‘Gerald McBoing Boing’ tells the story of a little boy who communicates through sound effects instead of spoken words. Composer, actor and beloved music teacher Curtiss Allen, Sr., who delighted audiences with his narration of Tubby the Tuba at last season’s family matinee, returns to the Symphony as the storyteller of this Academy Award-winning musical adventure based on the popular Dr. Seuss story. Each summer for 32 years Allen has led the Community Sings on Tuesday evenings at the Redlands Bowl, and once again he will bring his gifts of humor and storytelling to narrate this whimsical piece.

Revueltas’ ‘Homage to Garcia Lorca’ comes next. A moving tribute to the slain Spanish poet, the work utilizes the solo trumpet to chronicle the tale of the Socialist struggle against the Fascists during the Spanish Civil War. Audiences will enjoy the juxtaposition of impish joviality and somber, almost spiritual contemplation which is characteristic of much of Revueltas’ music.

“What Copland does with American music – expressing spirit and a feeling of place – Revueltas does with Mexican music,” said Maestro Fetta. “The bright orchestral colors and transparent textures will make this an especially exciting portion of the concert.”

Two additional pieces have been added to the afternoon’s concert.

The genius of Copland returns in the final piece, the much beloved ‘Appalachian Spring.’ The story told is a spring celebration of the American pioneers in 19th century Pennsylvania after building a new farmhouse. This uplifting finale will surely enchant audience members of all ages and will be enhanced by a large-screen visual presentation of Appalachian region images.

The Treasures of the Americas event will begin with the annual Family Music Fair from 12:30 to 2:30 p.m. The concert will start at 3 p.m. Both will be held at the historic California Theatre of the Performing Arts, 562 W. 4th Street, San Bernardino. Tickets start at $20 ($11 for students with an ID) and may be purchased at www.sanbernardinosymhony.org or by calling (909) 381-5388.