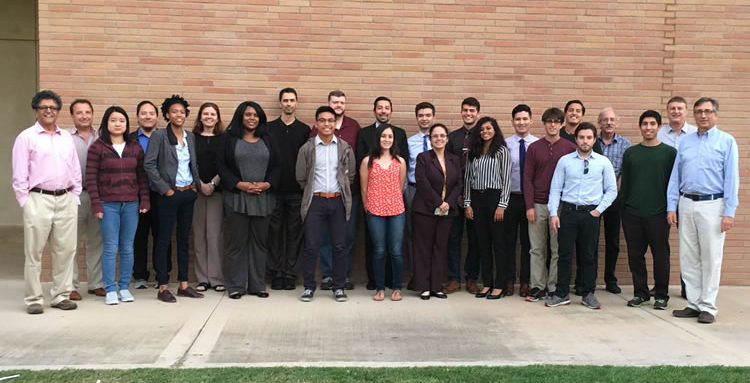 Above – “Startups for Innovators” workshop, taught by Mark Leibowitz and Jay Gilberg, in spring 2017.

Riverside, Ca. – The University of California, Riverside is poised to become a hub of innovation with a recent grant from the federal government that will help researchers transform their discoveries into real world applications.

UCR has been awarded the prestigious National Science Foundation (NSF) Innovation Corps Site status and a $500,000 grant to provide in-house commercialization training to UCR faculty and students over the next five years.

The NSF Innovation Corps (I-Corps) program prepares scientists and engineers to extend their focus beyond the university laboratory, allowing participants to accelerate research projects toward commercialization. The new award will allow 10 UCR teams per quarter to participate in “Startups for Innovators” workshops, where they will receive NSF I-Corps training on how to interview customers, engage with industry partners and develop ideas into a job-producing business. UCR participants will be eligible to receive up to $3,000 in funding to help develop an idea.

“The goal is to bridge the gap between public support of science and private capital funding of new commercial ventures,” said Rosibel Ochoa, UCR’s associate vice chancellor for technology partnerships. “This award solidifies UC Riverside’s advancement in the innovation and startup creation ecosystem. It provides a platform for ideas originating at the university to receive the training and support needed to promote paths of success for students, faculty and researchers.”

The deadline to apply for the Fall “Startups for Innovators” workshop series at UCR is Oct. 6. An information session for prospective participants will be held at UCR on Oct. 2. Teams who participate in UCR’s “Startups for Innovators” workshops become eligible for selection to the NSF I-Corps National Innovation Network Teams program. According to Ochoa, teams that participate in UCR’s NSF I-Corps programs also have a greater chance of receiving Small Business Innovation Research (SBIR) or Small Business Technology Transfer (STTR) award funding.

Ochoa believes that the I-Corps Program will pay dividends for the entire Riverside community, “whether it be creating a startup, licensing technology or connecting program participants with local industry partners to support further research and development.”

In addition to the award, Ochoa’s first year at UCR has seen the launch of the Entrepreneurial Proof of Concept and Innovation Center (EPIC), the expansion of the ExCITE accelerator in conjunction with the city of Riverside and the creation of the $10 million Highlander Venture Fund, which provides seed capital for UCR and Riverside County innovators.