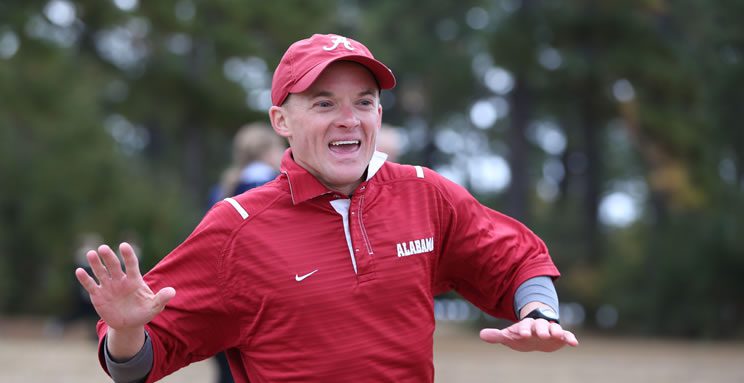 Riverside, Ca. – California Baptist University announced the hiring of Adam Tribble as its new head coach of men’s and women’s cross country and distance track on Wednesday. The national search led to Tribble, who spent the last seven seasons at The University of Alabama. “My family and I are thrilled to be joining the CBU family. After seeing the campus, meeting everyone, and hearing all CBU has to offer to student-athletes, I feel this is a place that has tremendous potential moving forward,” Tribble said. “I want to thank President Dr. Ronald Ellis, Vice President Kent Dacus and Athletic Director Dr. Micah Parker fo r providing me with this amazing opportunity.”Tribble oversaw the Tide’s cross country and distance runners, making him a great fit for the Lancers’ distance-only program. He also spent time as an assistant at Oregon State, Arkansas and the University of Georgia, where he graduated in 2002.“I’m thrilled to announce that Adam Tribble will be our new cross country and distance track coach,” Parker said. “We had a very deep pool of applicants interested in this position. Adam is a talented coach who fits the mission of our university and athletic department. He will be a blessing to our student-athletes. Our department looks forward to working with Adam to build a championship program.”Alabama had enjoyed some of its best seasons in recent years, with Tribble on staff. The Tide’s men’s cross country and track teams enjoyed their best year in quite a while in 2017-18.In the elite Southeastern Conference, Alabama’s men placed second at the cross country conference championship meet for its top finish since 2010. The team went on to take third in the South Region and produce the individual regional champion before it placed 14th in all of Division I with three All-American runners. It was the program’s first top-25 finish in the nation since 2010.Momentum carried over to the track and field seasons, with the men winning their first indoor SEC title since 1972 and then taking ninth in all of the NCAA. The Tide came back strong for the outdoor season, took fourth in the SEC and qualified 11 individuals for the NCAA Championships.On the women’s side, Alabama cross country stretched its run of top-seven finishes in the SEC to five years, with a seventh-place finish in 2017. The team took third and fourth in the SEC in 2014 and 2015, respectively, which were the program’s best performances since 1998. The team went on to take ninth at the 2017 South Regional after going in with six-straight top-six regional finishes, which included three-straight third-place marks from 2013-15.“I owe a huge debt of gratitude to Coach Dan Waters, Brad Ledford, Kevin Almond, and Greg Byrne at Alabama for making this all possible and for all their help and support over the past seven years,” Tribble said.Prior to Alabama, Tribble coached the Arkansas women to three-straight SEC cross country championships and two runner-up finishes in five seasons. The Razorbacks were inside the top 20 at the NCAA Championships all five years and placed as high as fifth in 2006.As a runner at Georgia, Tribble was a two-year captain of the Bulldogs track and field team and earned All-Region honors in cross country. He finished 46th at the 2008 U.S. Olympic Trials in the marathon.Alabama Coach Dan Waters had high praise for Tribble after also coaching him as a runner at Georgia.“I’ve always recognized Adam’s deep passion for the sport,” Waters told RollTide.com. “He’s educated himself in the sport as well as anyone. He has a fantastic relationship with distance runners and knows how to relate to them. Adam also brings a great level of organization and energy to our staff.”Tribble graduated from the University of Georgia in 2002 with a bachelor’s degree in health and physical education. He also earned a master’s degree from Georgia in movement studies.In May 2012, Tribble married Meredith Crane, who was a volunteer coach with Alabama’s distance runners and a former cross country and distance coach at the University of Mississippi. The couple have two children, a son, Ben, and a daughter, Georgia.

(Photos courtesy of The University of Alabama)