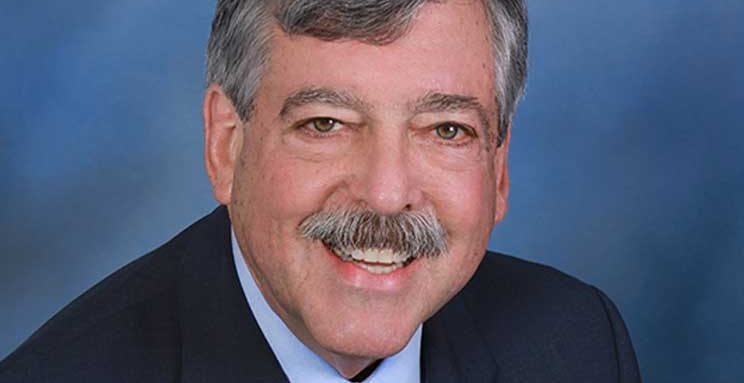 Riverside, Ca —  Best Best & Krieger LLP Partner John E. Brown was named the 2019 Ronald M. George Public Lawyer of the Year by the California Lawyers Association’s Public Law Section. Brown was honored at a reception Thursday night in downtown Los Angeles. The Public Lawyer of the Year Award, presented by California Supreme Court Justice Joshua Groban, recognizes Brown as an exceptional attorney who has demonstrated a commitment to public service throughout his career.

Groban said Brown’s career is based on “four decades of giving to his community” and “making it better” — values Brown embraced early in life that were ingrained by BB&K’s culture.

Brown said he was “extraordinarily proud” to receive the award. He discussed how he learned the value of public service law when he joined BB&K, and he congratulated his colleagues both in and out of the firm for their dedicating their legal careers to making communities better.

“The selection of John E. Brown as the 2019 Public Lawyer of the Year continues the tradition of selecting a public attorney who constantly goes above and beyond providing mere legal advice to his clients. His long career demonstrates a commitment to providing advice to public entities on a broad range of legal issues while striving for innovative solutions to the ever-growing complex problems facing public entities today,” said  Public Law Section Chair Bernadette Curry.

Brown has spent his entire legal career — more than 40 years — representing public agencies as an attorney at BB&K. He landed his first city attorney position with Desert Hot Springs in 1976 and served in that capacity for a decade. He served as city attorney to nearly two dozen municipalities, including Ontario for 22 years and Lafayette, San Jacinto, Perris, La Habra Heights and Apple Valley.

“John quickly became an integral member of the management team and a stabilizing force, working with the mayor and a council committed to changing the culture and becoming a model of good governance,” said Gregory Devereaux, managing partner at Worthington Partners and the former city manager of Ontario. “He utilized an approach to public service based on implementing the Council’s goals and direction whenever both a legal and ethical way forward could be found. This was coupled with the courage to stand firm on principle, no matter the level of discomfort or the cost, if it could not.”

At BB&K, Brown is a leader who helped the firm develop emerging practice areas to better serve public law clients. He served as the firm’s Municipal and Redevelopment Law Practice Group leader for 12 years and on its Executive Committee. From the beginning, Brown was a leader in firm efforts to diversify, ensuring the firm mirrored its public law clients.

Brown’s public service includes a variety of community organizations and nonprofits. He chaired Riverside’s first Homeless Advisory Commission and authored and presented that Committee’s continuum of care recommendations to address homelessness. His nonprofit board service includes the Mission Inn Foundation, the Sam and Alfreda Maloof Foundation for Arts and Crafts, Evergreen Memorial Historic Cemetery and the California Historical Society.

His work on the Homeless Advisory Commission is his “most significant contribution” to the community, according to Ronald Loveridge, director of the Inland Center for Sustainable Development and a former Riverside mayor and president of both the League of California Cities and the National League of Cities. Loveridge appointed Brown as chair of the Commission’s Task Force and the report Brown wrote became the basis for actions that started and enhanced homelessness services. “If cities are compared on what they do for the homeless, Riverside is certainly at or near the front of cities across California,” Loveridge said. “The reason is the 2001 Task Force report chaired by John Brown.”

Brown received his undergraduate degree from Claremont McKenna College, a master’s in Urban Studies from Occidental College and his law degree from the University of California, Berkeley.