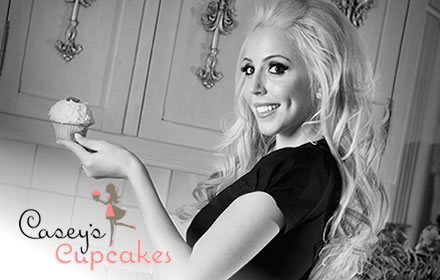 RIVERSIDE, CALIF. – And the winner is…Casey’s Cupcakes! This week, the Southern California confection boutique was chosen as the winner on the wildly popular and highly competitive Cupcake Wars on the Food Network.

Casey Reinhardt, the daughter of Kelly and Duane Roberts, owners of The Historic Mission Inn, was inspired by her great-grandmother’s homemade cupcakes and now brings the delicious flavors of her childhood to two communities which she holds dearly. She grew up in Laguna Beach and spent many memorable days and nights at The Historic Mission Inn with her parents.

Each week on Cupcake Wars, four of the country’s top cupcake bakers face off in three elimination challenges until only one remains. Casey’s Cupcakes was named the winner over shops from Philadelphia, New York and Los Angeles. The sweet prize: $10,000 and the opportunity to showcase Casey’s Cupcakes at a special event – in this case, the 50th anniversary of the Hollywood Walk of Fame, a theme well suited for Reinhardt and her background in television, film and modeling.

“This month has been amazing,” said Reinhardt. “We continue to receive so much support at the cupcake boutique at The Historic Mission Inn, and we’ve been welcomed with open arms in our new location in our hometown of Laguna Beach. This success has gone well beyond my expectations and I could not be happier.”

To celebrate winning Cupcake Wars, Reinhardt will make appearances at both Casey’s Cupcakes locations this Saturday, February 26. She will be at the Laguna Beach cupcake boutique from noon until 1 p.m. and at The Historic Mission Inn location from 3 p.m. to 4 p.m. Guests will be treated to live entertainment. As part of the celebration, Casey’s Cupcakes will make available Cupcake Wars Four Packs featuring the winning flavors on the show. The Four Packs will be available for $15 from Friday, February 25 through Sunday, February 27 and include:

Lavender: Lavender cake, lavender buttercream, rice paper as the feathers (the purple stripe on the feathers is frosting), candied lavender, glitter and a pearl.

Casey’s Cupcakes takes design inspiration from a classic Parisian café with a glamorous Hollywood twist. Incorporating bright splashes of pink with classy black accents and whimsical accessories, Casey’s has become a preferred spot to relax and enjoy a delightful cupcake, and the perfect place to pick up treats for the next birthday or office party, bridal and baby showers, meetings, celebrations and other quaint gatherings.

Casey’s Cupcakes come in 12 delicious flavors from the popular Rockin’ Red Velvet and Sassy Strawberry to Decadent Dark Chocolate and Luscious Lemon. Each month a different “Cupcake of the Month” is featured, inspired by seasonal holidays. In addition to cupcakes baked fresh daily, the shops offer fun and flirty cupcake-themed merchandise. Casey’s Cupcakes also offers signature “cupcake wedding cakes” at both locations, which are open from 9 a.m. to 9 p.m. daily.

Casey has always been passionate about business, charitable causes, and her modeling and acting career.  In 2002 Casey founded The C.A.S.E.Y Foundation, Children’s Alliance for the Success and Education of Youth in need. She has also made significant accomplishments in her acting career starring on one of MTV’s highest rated shows, “Laguna Beach: The Real Orange County.”