Changing America: The Emancipation Proclamation, 1863 and the March on Washington, 1963 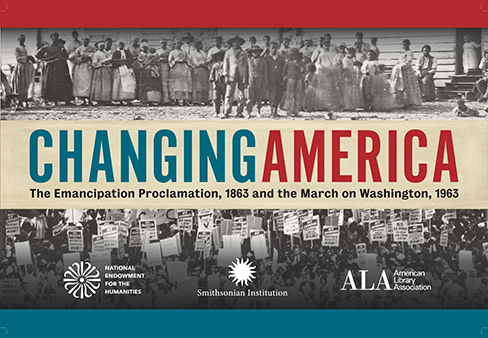 (RIVERSIDE, CA) – “Changing America: The Emancipation Proclamation, 1863, and the March on Washington, 1963,” a traveling exhibition opening at the Riverside Metropolitan Museum on Friday, August 5, examines the relationship between two great people’s movements that resulted in the Emancipation Proclamation in 1863, and the March on Washington in 1963. Both grew out of decades of bold actions, resistance, organization, and vision. One hundred years separate them, yet they are linked in a larger story of liberty and the American experience – one that has had a profound impact on the generations that followed.

“We are pleased to have been selected as a site for this exhibition working in conjunction with the Riverside African American Historical Society,” said Sarah Mundy, Riverside Metropolitan Museum and Cultural Affairs Director. “The dramatic story of how these two pivotal events came into being, a century apart, and how each helped put the nation on a course toward fulfilling its commitment to liberty and justice for all, is one that can inspire all Americans. Decades of work, struggle and sacrifice by many dedicated individuals and groups preceded both of these events. The exhibition tells the story of these struggles and their impact on American history and on the extension of equal rights to all Americans.”

Emancipation from slavery was not the product of one act but of many.  In the 19th century, enslaved and free Americans chipped away at slavery through daily acts of resistance, organized rebellions, and political pressure on politicians, generals, and the U.S. government.  Finally, on September 22, 1862, Abraham Lincoln issued the preliminary Emancipation Proclamation, which ordered that as of January 1, 1863, all enslaved individuals in all areas still in rebellion against the United States “henceforward shall be free,” and under the protection of the military.

The Emancipation Proclamation was limited in scope and revolutionary in impact. It committed the nation to ending slavery. The U.S. Congress responded with Constitutional amendments abolishing slavery, expanding citizenship rights, and giving black men the right to vote.  These acts changed the political landscape, but the new freedoms were stripped away in the following years. However, on each Emancipation Day anniversary, Black Americans organized parades and speeches reminding the black community and the entire nation of a commitment that remained unfulfilled.

These local Emancipation Day celebrations and many other actions set the stage for the national push for freedom in the 20th century. On August 28, 1963, an estimated 250,000 Americans gathered at the Lincoln Memorial in the District of Columbia to mark the 100thanniversary of the Emancipation Proclamation. People traveled from every state, united across race, class, and ideological lines, and representing organizations, unions, churches or simply themselves. The prayers, electrifying speeches, and stirring music of that day served to remind Americans of the nation’s commitment to fulfill its founding principles of liberty and equality for all.

In the months following the march, demonstrations and violence continued to pressure political leaders to act. The Civil Rights Act of 1964 and the Voting Rights Act of 1965 were turning points in the struggle for equality. The bills outlawed segregated public facilities and prohibited discrimination in employment and voting. The success of the March on Washington and the achievements of the modern struggle for civil rights have provided a lasting model for social change.

“Changing America: The Emancipation Proclamation, 1863 and the March on Washington, 1963” is presented by the Smithsonian’s National Museum of African American History and Culture and the National Museum of American History in collaboration with the American Library Association Public Programs Office. The exhibition is made possible by the National Endowment for the Humanities (NEH) and is part of NEH’s Bridging Cultures initiative, “Created Equal: America’s Civil Rights Struggle,” which brings four outstanding films on the civil rights movement to communities across the United States (see http://createdequal.neh.gov). “Created Equal” encourages communities across the country to revisit and reflect on the long history of civil rights in America.

The exhibition will travel to 50 venues across the nation, accompanied by public programming that will help audiences understand and discuss the relationship between these two great people’s movements.

The Museum is sponsoring free programs and other public events in connection with the exhibition. Contact 951.826.5273 or visit www.riversideca.gov/museum for more information. “Changing America” will be on display at the Museum until September 9, 2016.

The National Museum of African American History and Culture was established as a Smithsonian Museum by an Act of Congress in 2003. It is the only national museum devoted exclusively to the documentation of African American life, art, history and culture. Groundbreaking for the $500 million Museum took place in February 2013 in a ceremony featuring remarks by President Barack Obama; former First Lady Laura Bush, a member of the Museum’s advisory council; and Rep. John Lewis (D-Ga.) who submitted the legislation that created the museum. It is now under construction on Washington’s National Mall, on a five-acre site adjacent to the Washington Monument. It is scheduled to open September 24, 2016. For more information, visit www.nmaahc.si.edu.

The National Museum of American History collects, preserves and displays American heritage through exhibitions and public programs about social, political, cultural, scientific and military history. Documenting the American experience from Colonial times to the present, the museum looks at growth and change in the United States. For more information, visit www.americanhistory.si.edu.

Created in 1965 as an independent federal agency, the National Endowment for the Humanities supports learning in history, literature, philosophy and other areas of the humanities.  NEH grants enrich classroom learning, create and preserve knowledge and bring ideas to life through public television, radio, new technologies, exhibitions and programs in libraries, museums and other community places.  Additional information about the National Endowment for the Humanities and its grant programs is available at www.neh.gov.