Community Garden goes for the Gold! 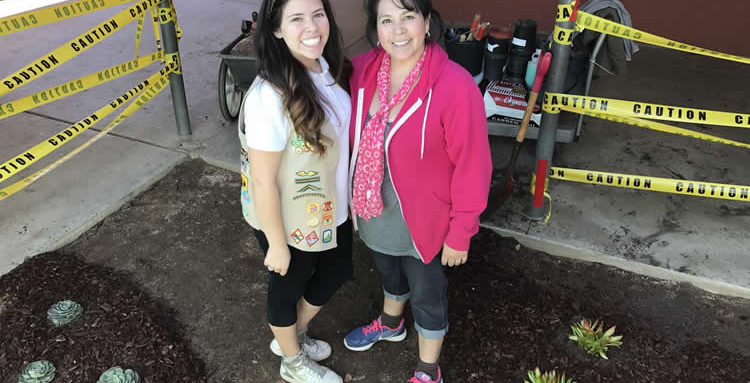 Redlands, CA – Ivana W. a San Gorgonio Girl Scout Ambassador was looking for a way to complete her Gold Award, the highest award in scouting, and her search lead her to Inland Empire Resource Conservation District (IERCD).

At the first meeting Ivana came to the IERCD office to discuss the project in which she was pursuing the most prestigious merit. Ivana accompanied by her mother and Troop 286 Leader, Virna, shared that she had chosen a space at Mentone Elementary School in Mentone to revitalize in honor of a teacher who had passed away of cancer. The space was originally dedicated as a rose garden in the 80’s because the teacher had loved roses. Over the years the roses perished due to poor soil and drought conditions. Ivana’s mission to attain her Gold Award needed to include conservation classes for the third grade students who would be the caretakers of the new garden, painting a mural with the inspiration of the school’s mascot, building a sitting area for the students, and planting native plants that resemble roses in the garden. The purpose of this mission was to ensure sustainability of the garden through education and stewardship.

IERCD presented a series of three conservation education programs to prepare the three third grade classes. The first program delved into Water Conservation to introduce the effects of drought and ways to conserve water. The second program presented was Toil of Soil which uncovered the issue of the poor soil conditions. The third and final program, Growing Native, helped the students blossom into knowledgeable native plant stewards.

In between the class visits at Mentone Elementary, Ivana shared that her dream was to become a teacher. Her determination, professionalism, and ability to galvanize others will take her very far in life and inspire her future students.

IERCD partnered with the San Bernardino Valley Water Conservation District (SBVWCD) to complete this project. The SBVWCD funds a grant for two community gardens per fiscal year. The SBVWCD garden grant is used to purchase native soil, mulch, and signage for the two gardens so that they can be used as an educational tool. This year the first garden implementation was at Colonel Joseph C. Rodriguez Prep Academy in San Bernardino. It has been a wonderful and rewarding opportunity to work on the Rodriguez Prep native plant garden and with Ivana on the Mentone Elementary succulent garden. More gardens will be implemented later this year in the service area of West Valley Water District to allow more outdoor learning opportunities.

The Mentone Elementary project’s journey was not an easy one. There were setbacks along the way but due to Ivana’s perseverance and with the support of her mother and all those involved the garden will be implemented on January 26th, 2017. After implementation of the garden Ivana stated, “Many thanks for assisting me in serving the community and obtaining my Gold Award”.