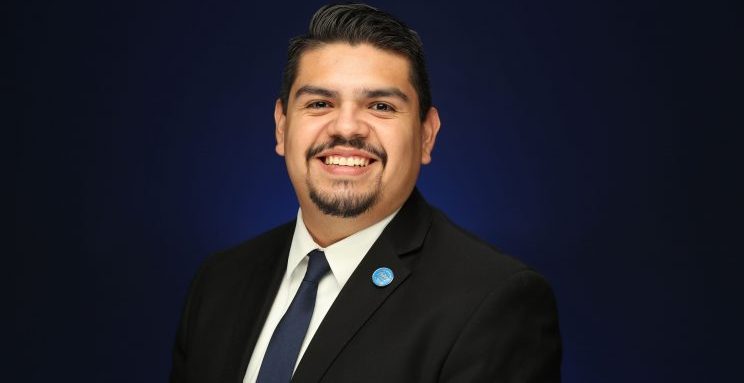 The 30 Under 30 program was established by former Assemblymember Wilmer Amina Carter, a CSUSB alumna and retired CSUSB staff member. The event honors 30 individuals under the age of 30 who exemplify dedication, innovation and service in the community, and live, volunteer or work in in the 47th district, which includes all or portions of Colton, Fontana, Grand Terrace, Rialto and San Bernardino, as well as the unincorporated communities of Bloomington and Muscoy.

In addition, Angie Denisse Otiniano Verissimo, an associate professor in the Department of Health Science and Human Ecology at CSUSB, was selected for the inaugural Wilmer Amina Carter Award for her continued service to the Inland Empire community.

The ten CSUSB alumni who were honored at this year’s 30 Under 30 event are:

Barcenas serves as the policies and legislative specialist for the Associated Students, Inc. at CSUSB. He is responsible for the corporation’s legislative affairs portfolio that includes policy analysis, civic engagement, internal and external affairs.

During his collegiate career, Barcenas served as the vice president of University Affairs for the California State Student Association, and president for the ASI at CSUSB, where he focused on higher education issues related to social justice, equity and affordability.

In 2019, Barcenas was named the Outstanding Employee within the Division of Student Affairs at CSUSB for his work in ASI, and in 2015, was named Undergraduate Student of the Year by the Association for Student Conduct Administration for projects on Title IX and the national “It’s On Us” campaign.

Barcenas now serves as chair of the CSUSB Staff Council, is a member of the Latino Alumni Chapter Board of Directors, and is an alumnus of the Sidley Austin LLP Pre-Law Program and the Congressional Hispanic Caucus Institute. As a first-generation Latino, he holds a B.A. in political science from CSUSB and will be a

master’s candidate in the School of Public Policy at the University of California, Riverside beginning fall 2019.

Barragan is the coordinator at the Undocumented Student Success Center (USSC) at CSUSB. She is a Latinx woman and a formerly undocumented individual, who earned a B.A. in communication studies with an emphasis in human communication, and a minor in intercultural communication. Barragan is an advocate for the immigrant community, particularly the undocumented community. She has been an active participant in the current and ongoing immigrant rights movement. As the coordinator at the USSC, Barragan continues her advocacy efforts for her students in order to ensure they receive all the information and resources available, as well as the support and encouragement they need.

Barragan was born in Guadalajara, México. She came to the United States with her family in 2001 and has lived in California ever since. Barragan’s goals are to bring awareness about all the different identities that intersect with the undocumented status. She has been accepted into the Higher Education-Student Affairs Master’s program at the University of Redlands. She aims to focus her graduate research on the undocumented community, specifically the experiences of undocumented Latinx women in higher education.

Over the course of her young adult career, Bruny has developed a compassionate, professional background in human development that began at the age of 18. She began her career tutoring for local families in the Inland Empire communities during high school. While continuing her educational dreams, she earned her bachelor’s degree in psychology. After graduating, she impacted youth as a transitional kindergarten teacher.

She is currently the program director for the nonprofit organization Music Changing Lives, which addresses the increasing issues leading to high drop-out rates by providing access to music and art after-school programs in San Bernardino and Riverside counties. This position has allowed her to collaborate with like-minded individuals to develop solutions targeting youth, such as financial literacy, civic engagement, empowerment to policy, and encouraging a love for the arts. She wishes to inspire individuals by giving back to the community where she was born.

In her leisure time, Bruny is working to establish solutions for individuals lacking self-development. Her goal is to bring unity within each community and discover leaders who will bring change that they would like to see.

Garcia began as a probationary Explorer in May 2016. Since she joined the post, she has grown and developed into a hardworking leader, whom the post looks to for advice and direction. Garcia, who currently holds the rank of lieutenant, dedicates her time to not only giving back to the community of Fontana, but to her fellow Explorers. Garcia is tasked with running the day-to-day operations and making sure all new Explorers are trained and assigned to Explorer mentors. She also oversees the handling of all the administrative paperwork that comes with a new Explorer joining the post.

Garcia is a member of the Color Guard who is often tasked with presenting colors at many city functions. She also dedicates her Thursday afternoons to mentoring Explorers with things such as homework, and also assists the Jr. Flip program on Friday nights and Saturdays, as well as other ROP programs hosted by schools in surrounding cities.

Dr. Hammad grew up in the Inland Empire and serves under many capacities as instructor and director of multiple projects and initiatives in public educational and nonprofit organizations. As an educator, she has integrated contemporary issues of Arab culture, such as healthcare, environment, human rights, media and film into the classroom. She has extensive experience in grant development, instruction, teacher training, assessment and program administration and has worked with students in K-16. She was recently named by the International Literacy Association (2019) as one of 30 Under 30 literacy leaders and visionaries creating positive change in the global literacy landscape.

Hammad is actively involved in community-based programs that focus on educational, environmental, health, social and interfaith issues as part of her work with two nonprofit organizations in the state: Sahaba Initiative in San Bernardino and Human Assistance and Development International in Culver City.

As an Arab Latina, Hammad is fluent in four languages: Arabic, Spanish, English, and French. She holds interdisciplinary research interests, and her work is guided by her desire to close the gaps in the lack of positive narratives representing the Latino, Arab and Muslim communities.

Kohar has been a registered nurse at Arrowhead Regional Medical Center for eight years. In the past four years he has worked as a nurse case manager. Kohar collaborates with physicians, nurses and other healthcare professionals for a safe and effective plan of care. He also reviews the utilization of hospital resources to increase efficiency in delivery of quality healthcare services. In addition, he arranges any post-hospitalization needs such as medical equipment and outpatient rehabilitation to promote patients’ wellness and autonomy.

Kohar is driven by an unrelenting quest of a patient-driven focus and excellent patient experience, and considers it an absolute privilege to continue serving the community of San Bernardino.

Kohar lives with his wife, Candice, and dog, Bailey. He enjoys traveling, going on culinary adventures and hiking. In his free time, he reads articles about watches and tech advancement, discovers new music, and goes to the movies.

Ogidikpe, who graduated from Cajon High School, earned a bachelor’s degree in biological psychology and a minor in communication studies from CSUSB. He is a native of Bayelsa State in Nigeria, and moved to the United States from Nigeria in 2010.

During his time at CSUSB, he was a very involved student leader. He was elected to serve as student body president for the Associated Students Incorporated, having previously served as executive vice president. Ogidikpe was also a member of the Student African American Brotherhood, University Honors Program, Black Student Union, and the award-winning Model United Nations Program. His new goal is to attend law school.

Sandoval is a public relations associate for San Manuel Band of Mission Indians and a freelance writer for the Inland Empire Community News. He holds a bachelor’s in communication studies from CSUSB and an associate degree in radio broadcasting from San Bernardino Valley College (SBVC).

As an advocate for education and childhood cancer, he lends much of his time inspiring students to attend college and give back to the community. In 2003 his little brother passed away of cancer and since then, he has been passionate about spreading awareness and contributing to the Childhood Cancer Foundation of Southern California with giving donations, attending events and providing the organization news coverage.

In 2019, Sandoval participated in the Black and Brown Conference, Communication Studies Symposium, and Professor for a Day at CSUSB, and visited Lankershim Elementary as a guest speaker during career week. Sandoval currently serves on the Communication Alumni Council at CSUSB; the Radio, Television, & Film Advisory Board at San Bernardino Valley College; and California State Assemblymember Eloise Reyes’ Education Committee, where he is generating a plan to teach high school students about financial literacy, in hopes of decreasing poverty in San Bernardino and beyond.

Torquato is the finance manager at Chaffey FCU. Her career in credit unions began at the age of 17 as an intern for San Bernardino School Employees FCU. There she caught the “People Helping People” bug. Over the last nine years she has made it her mission to help her community by living the credit union philosophy both personally and professionally.

Torquato earned her bachelor’s degree in finance from CSUSB in March 2018. While both working and studying as a full-time student at CSUSB, she was also attending Western CUNA Management School. She graduated with the Pi Class in July 2018, where she was the youngest student in her class earning the nickname “Baby Pi.”

She is also passionate about serving and mentoring her community’s underprivileged girls. Growing up in San Bernardino, she understands how hard it can be to find the right resources or guidance. She engages in the community by volunteering the last three years with Women United of Arrowhead United Way and serving as the treasurer and chair of the Financial Stability Committee. In her free time, Torquato enjoys finding adventures through traveling and immersing herself in the world’s cultures.