CSUSB’s GEAR UP Prepares Students For Life After High School 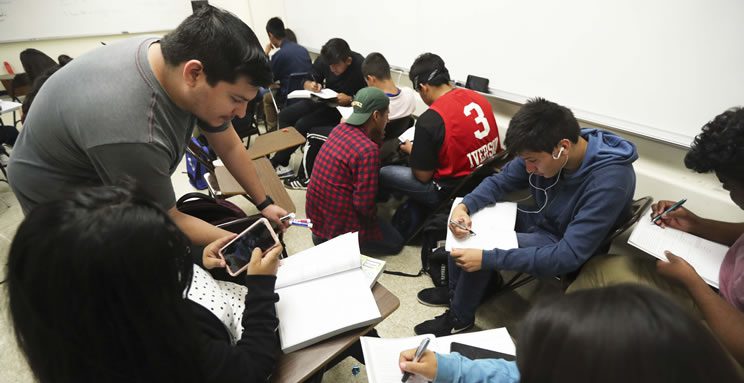 The Cal State San Bernardino GEAR UP was awarded $14.2 million over six years, which allows it to work practically year-round with a cohort of about 3,600 students who will graduate from San Bernardino City Unified’s comprehensive high schools in 2020. Photo: Robert A. Whitehead/CSUSB

It’s been a busy summer for the GEAR UP program at Cal State San Bernardino.

San Bernardino, CA – Nearly 100 high school students from the San Bernardino City Unified School District, who will enter their junior year in August, met at CSUSB to embark on “Explore 23,” a two-week tour of all 23 California State University campuses.

A day later, more of their peers arrived on campus for the nearly four-week GEAR UP University, which kept the second-floor classrooms of the John M. Pfau Library buzzing with activity.

GEAR UP — which stands for Gaining Early Awareness and Readiness for Undergraduate Programs — is funded by the U.S. Department of Education, and the CSUSB program is one of 41 nationwide that received federal grants in 2014.

As Summer Steele, director of GEAR UP, sees it, this is part of an effort to make students, and their parents, aware of the opportunities available to them to attend college, and what the students need to do so that they can determine their own future.

The Cal State San Bernardino program was awarded $14.2 million over six years, which allows it to work practically year-round with a cohort of about 3,600 students who will graduate from San Bernardino City Unified’s comprehensive high schools in 2020. While some students in this cohort have transferred in and out of the district, GEAR UP essentially has been working with this group of students since they were in the seventh grade.

And within each of those goals are measurable outcomes to meet annually, such as pre-algebra/algebra pass rates or course failure rates, as GEAR UP site coordinators, academic advisers and tutors, who are assigned to each district high school, work with the students during the school year.

Emily Sanchez, a student at Indian Springs High School in San Bernardino, said the program helped her to focus on her schoolwork. As a middle schooler, Sanchez didn’t think school was all that important. By the time she was a high school freshman, she said, “it was really bad. My family, they would see my grades and say, ‘Well, just do your best.’ I really didn’t know what my best was.”

Sanchez began working with the GEAR UP academic adviser at her high school who showed her how to study, and how to approach her classroom work and homework. That put her on track, and she says attending college is now a goal.

“It’s like a big family,” said Tyler Scantlebury of GEAR UP. She attends Cajon High School near the CSUSB campus, and once thought she would join the military out of high school. “They don’t treat you like an outsider. Everyone is equal or the same. And when you need help, they help you. There are some programs that say they will help you, but you don’t get the help that you need. But GEAR UP, it does help.”

Both students say the biggest lesson they’ve learned from GEAR UP is responsibility, showing them how to own their successes as well as when they fall a little short.

“The way they talk to you is not in a demeaning way, like, ‘Get your grades up,’ ‘Do this,’ ‘Do that.’ They’re not like that,” Scantlebury said. “They’re comforting — they comfort you to get your grades up and do well. Like, ‘You know this is right, I can’t force you, but I would rather you do this.’ I feel we need more of that, and GEAR UP gives that.”

Steele said she’s seen the growth in students, especially those who have been working with GEAR UP since the seventh grade. “You see the tremendous growth from last summer to this summer,” she said. “You can just see the growth, not just in attitude toward education, but they’re becoming responsible young adults. There’s a big difference between a 14-year-old and a 16-year-old. I’ve definitely noticed some of those shifts in both the way that they’re thinking and speaking.”

And as for measurable outcomes, Steele points to these as some of the highlights, when compared to the incoming senior Class of 2019:

Steele also points out that GEAR UP is not going it alone in the effort. Because the federal grant was a partnership grant, the CSUSB program had to find community partners to match that grant through services and in-kind assistance.

GEAR UP also involves the parents of its students to get them involved through workshops on topics such as financial aid and even bringing them along on college campus tours.

Moreover, just as important, Steele said, the program involves teachers, providing professional development opportunities that give educators more tools to use to help their students achieve. “GEAR UP at its core is about sustainability and systemic change,” she said. “So part of what we have done with GEAR UP is we’ve provided a lot of educator professional development.”

As the Class of 2020 nears its finish line, Steele said she hopes to see funding to get another cohort of students through its high school graduation while preparing them to succeed in college.

Moreover, she said she hopes to see a change in the way students and their parents view a college education.

“I really want to see it become a systemic change so that there is a college-to-career-going culture for all of the students,” Steele said. “It can be attainable for everyone, it can be an option for everyone. It’s just about shifting those mindsets and having those conversations early enough on.”

California State University, San Bernardino is a preeminent center of intellectual and cultural activity in Inland Southern California. Opened in 1965 and set at the foothills of the beautiful San Bernardino Mountains, the university serves more than 20,000 students each year and graduates about 4,000 students annually.