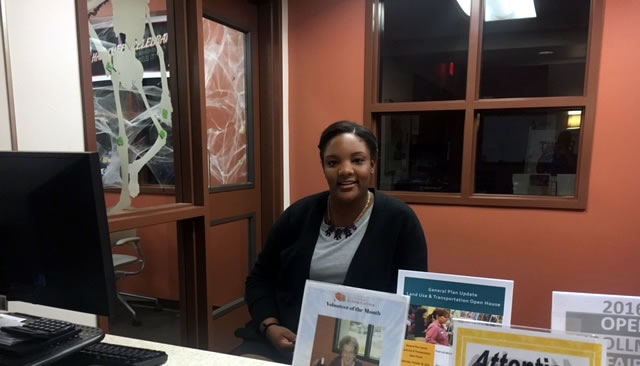 Fontana, Calif. –  22-year-old Justice Montgomery has always had a passion for leadership opportunities and getting involved in her community. At 16 years old, the Fontana native joined the Mayor’s Youth Advisory Council (MYAC), a City of Fontana program that works with teens dedicated to improving their city by creating programs that appeal to middle school and high school students. She didn’t know it at the time, but she was setting off on a career path in public service. The young leader has since held part-time positions with the City of Fontana, graduated from Azusa Pacific University and was recently promoted to a full-time position at the Senior Center where she continues to make a difference in many lives.

Justice Montgomery served on the Mayor’s Youth Advisory Council (MYAC) for three years from 2010 – 2013 in various capacities culminating in leading MYAC as Chairperson her senior year in high school.  During her time with MYAC, she assisted in various community events like Stand Up, Speak Up, Teen Summit on Anti-Bullying, various teen events; and became the voice for an entire generation of youth in Fontana.  “I learned a lot about working with people that are different from myself during my time with MYAC,” said Justice Montgomery. “It’s a big reason why I work well with different personalities now.”

Shortly after graduating from Rancho Cucamonga High School in 2013, she continued her education at Azusa Pacific University where she majored in Business Management. During the years away at college, Justice returned every summer to work in various summer programs with the City of Fontana. Over the course of four years, she has continued her work in the community by becoming a Resident Advisor at Azusa Pacific University, volunteering at various campus and community events and continually seeking ways to positively contribute to the world around her.

She graduated from Azusa Pacific University in May 2016 and came back to work in Fontana as a Senior Community Services Assistant at Don Day Neighborhood Center. During her short time at Don Day, she has successfully created community relationships with her helpful demeanor and welcoming smile.

When the opportunity arose in the Community Services Department, she applied for the Administrative Aide position at the Senior Center hoping to work in a capacity that ensured her talents and friendly disposition would be an appreciated asset.  Having passion, vision, and a strong work ethic, it was clear that Justice was a prime candidate for the position and gladly accepted the promotion. “The City of Fontana is always looking for qualified and motivated candidates that are passionate about serving their community,” said Human Resources Director Annette Henckel.

The City of Fontana offers youth programs such as MYAC that can lead to a potential career in city government. “A lot of teens feel that their voice isn’t valued and need to find those outlets to be heard,” stated Justice. “MYAC is a great way to do that, get involved and respond to the needs of your community.”

To learn more about the Mayor’s Youth Advisory Council visit fontana.org or contact (909)-349-6960