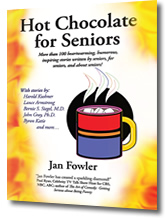 Jan Fowler and contributing authors & editors of the new book, “Hot Chocolate for Seniors” will be available for a book signing this Sunday at Barnes & Noble Booksellers from 11am to 4pm.

Look for “The Jan Fowler Show for Baby Boomers & Others” to be nationally syndicated on TV beginning January 2012!!!

Hot Chocolate for Seniors is an inspiring anthology of heartwarming, touching and often humorous true-life accounts of real people from all walks of life. It is for seniors, by seniors and about seniors. It features those nostalgic reminiscences and memorable experiences that we do not want to see lost and forgotten, but preserved forever.

Because this engaging, inspiring book carries so many uplifting messages, it will have no trouble becoming the kind of popular gift book that delights mothers, fathers, grandparents, aunts, uncles, teachers and friends on Mother’s Day, Father’s Day, birthdays, anniversaries, national holidays, and other special occasions.

Jan Fowler is an ambassador for seniors!

She is the television producer-host of “Jan Fowler Presents Senior Moments” TV Series, and an award-winning national columnist with more than 2 million readers in 10 states.  Jan is also a community theatre actress, writer, emcee, philanthropist, and a popular and frequent speaker at ”Successful Aging Expos” for seniors.   She was one of ten Inland Empire women to receive the 2005 Town & Gown “Phenomenal Women” award and was twice the recipient of “Woman of Achievement” awards given by the National League of American Pen Women.

As the founder of Starburst Inspirations, Inc., a 501 (c) (3) nonprofit organization which supports Redlands Drug Court (also known as Redlands Center for Change) she hosts annual fundraising luncheon programs featuring inspirational speakers and musical entertainment at Redlands Country Club. All monetary proceeds, along with stylish used clothing, are then donated to participants going through the local drug and alcohol rehabilitative treatment program who are trying to reclaim their lives, and in some instances, regain custody of children who may have been taken from them and temporarily placed in foster care.