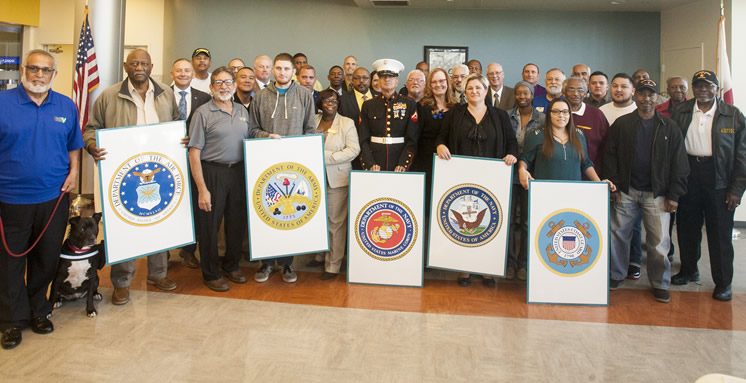 Moreno Valley, CA – Moreno Valley College (MVC) was selected as one of 208 higher education institutions from across the nation as Best for Vets by the Military Times, an independent source for news and information for military members and their families.

In all, only four California community colleges were ranked by the Military Times; Pasadena (13th) and Southwestern (28th) in Chula Vista were the only other colleges ranked from California. Central Community College-Nebraska was the overall No. 1-ranked community college.

“We are grateful for our Veterans and are committed to providing a supportive learning environment that will assist them in achieve their educational goals” Dyrell Foster, vice president, Student Services, said. “We have been working hard to better support our student Veterans and we are honored that the work we have done has earned us this military-friendly designation.”

The rankings, which are available at https://rebootcamp.militarytimes.com/, are based on the Military Times’ annual survey – the most comprehensive school-by-school assessment of Veteran and military student services and rates of academic achievement – as well as a detailed review of public data collected by federal agencies. As for all Military Times rankings, Best for Vets: Colleges is an editorially independent, objective and rigorous news project. This feature evaluates the many factors that help make colleges and universities a good fit for service members, military Veterans and their families. About 500 colleges took part in this year’s survey.

“Military Times’ Best for Vets designation is trusted throughout the Veteran community as the mark of excellence for schools and other organizations that work with Veterans, service members and military families,” George Altman, the Military Times editor in charge of the rankings, said. “It can’t be bought with advertising dollars – unlike some other supposedly Veteran-friendly rankings – only earned through a record of steadfast service and dedication to those who have served.

Fewer than half of the roughly 500 colleges and universities that competed for the recognition earned the right to call themselves Best for Vets in 2019. Their efforts should be commended.”

“It is an honor to be ranked among the best community colleges in the nation,” Lizette Tenorio, Veterans services specialist, said. “The services, policies and collaborations that we have set forth come from knowing what our Veteran students need in order to transition and reach their academic goals. This is our way of thanking them for their service by providing them with the tools and support needed to succeed.”

MVC became a fully accredited college in 2010, making it the 111th California community college. The College has grown from serving 3,490 students in the College’s first semester to an annual enrollment of 10,000 students. MVC offers a number of academic programs as well as programs in health sciences and public safety programs at its Ben Clark Training Center, located 11 miles from the main campus.

The College’s Veterans Service office assists military personnel transitioning to civilian life by providing effective and timely services in a safe, challenging and supportive learning environment. College Veterans have a dedicated service space at the College as well as access to counselors to assist in their college transition. Each November, the College hosts a Veterans Breakfast to raise scholarship funds. This year’s event is scheduled for November 30 and tickets are available on line at http://www.mvc.edu/files/vb-2018-ticket-form.pdf.

In addition to being posted on Rebootcamp, the rankings are published in Military Times print products – Army Times, Navy Times, Air Force Times and Marine Corps Times – sold on newsstands and sent to subscribers the week of Oct. 22. They are also promoted throughout the Military Times social media channels.

MilitaryTimes.com is a part of the Sightline Media Group, formerly known as the Army Times Publishing Company, which first published Army Times in 1940. Throughout its history, the company has a strong heritage and tradition of meeting the highest standards of independent journalism and has expanded with publications serving all branches of the U.S. military, the global defense community, the U.S. federal government, and several special interest, defense-oriented industry sectors.