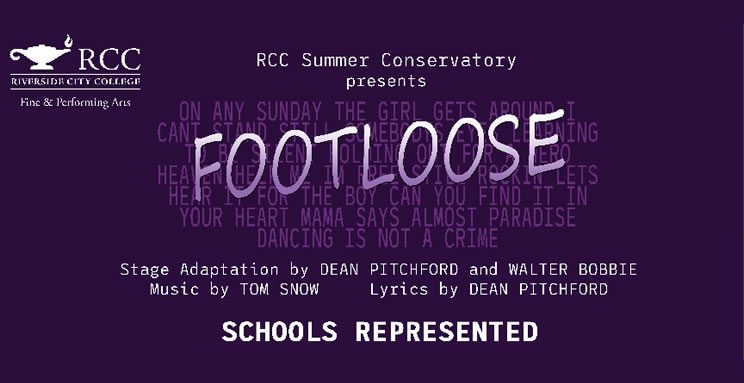 The Summer Conservatory offers students the chance to perform in a theatrical performance and receive college credit for their participation in the program. The students have been taking a dance class during the day and then holding rehearsals in the evenings four days a week and Saturdays. The program stars local students Avery Hansberger (North High School) as Ren, Julianne Riddle (Riverside City College) as Ariel, Katie Savage (Riverside STEM Academy) as Rusty and Wyatt Hopps (Encore High School) as Willard.

“It’s been a great return of the conservatory,” Jodi Julian, professor and director of the program, said.

In addition to acting and dancing students will also handle all of the backstage work.

“There are so many people working together to create a great show,” said Hopps.

FOOTLOOSE is a story about Ren and his mom moving from Chicago to a small farming town. Ren is prepared for the inevitable adjustment period at his new high school. What he isn’t prepared for are the rigorous local edicts, including a ban on dancing instituted by the local preacher, determined to exercise control over the town’s youth.

When the reverend’s rebellious daughter sets her sights on Ren, her roughneck boyfriend tries to sabotage Ren’s reputation with many of the locals eager to believe the worst about the new kid. The heartfelt story that emerges is of a father longing for the son he lost and of a young man aching for the father who walked out on him. To the rockin’ rhythm of its Oscar and Tony-nominated top 40, FOOTLOOSE celebrates the wisdom of listening to young people, guiding them with a warm heart and an open mind.