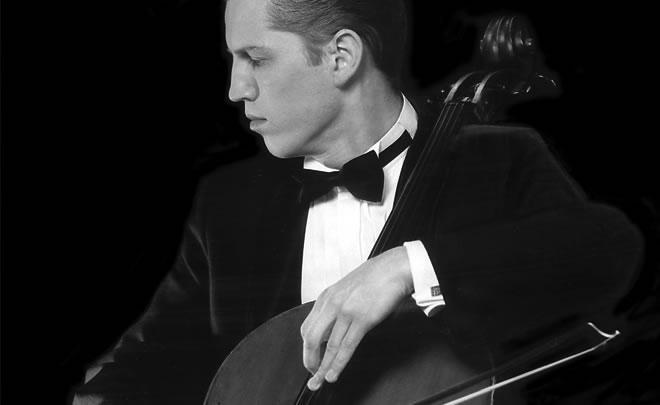 “We have been likening the selections this season to a celebration of the diverse flavors of symphonic music. So in this final course of the symphonic feast, we will serve up four of the most beautiful symphonic pieces ever written,” said Music Director and Conductor Frank Paul Fetta.

The concert will open with what Fetta describes as a “wonderful and delightful masterpiece,” Wolfgang Amadeus Mozart’s Magic Flute Overture from the opera of the same name which premiered on September 30, 1791, just two months before the composer’s untimely death. Although ill at the time, Mozart conducted the premier, writing to his wife shortly thereafter about his excitement with the growing crowds attending the two-act opera. First recorded in 1937, the work has inspired numerous books, films, art works, and musical adaptations.

“Pyotr Ilyich Tchaikovsky’s romantic interpretation of the Rococo period and then David Popper’s virtuosic fantasy complete the first half of this repast which will be served by a good friend of the Symphony, cellist Ruslan Biryukov,” explained Fetta.

Considered the closest Tchaikovsky ever came to writing a full concerto for cello and orchestra, the Variations on a Rococo Theme was completed in 1877. Part of the difficulty in performing this piece lies in the fact that each of the seven variations follows each other without a break to allow the soloist to rest for a few moments. In addition, the soloist is challenged by mostly having to play in the high register using the thumb position. Further challenges portend with Popper’s Hungarian Rhapsody, Op. 68, which was, like most of the Bohemian composer’s pieces, written to highlight the unique sound and style native to the cello, extending the instrument’s range to previously unreached heights.

Maestro Fetta believes Biryukov is well-prepared to address the challenges posed by the selected works.

Described by Wendy Kikkert of the Beverly Hills Outlook as “an astonishing young cellist,” and by Ted Ayala of the Crescenta Valley Weekly as possessing “commanding musicality and technique,” Biryukov is a graduate of the Baku Music Academy, Tchaikovsky Moscow Conservatory, and the USC Thornton School of Music. He is the founder of the Glendale Philharmonic, the Los Angeles Cello Quartet, and artistic director of the Positive Motions Concert Series in Los Angeles. He is known for his superb artistry and passion, has performed throughout the world and, in 2003, was awarded permanent residency by the US government as an “Extraordinary Ability Artist.” He last performed with the Symphony during their 2013/14 season and regularly collaborates with Maestro Fetta on other local projects.

Finally, and as described by Fetta as “the dessert to this symphonic meal,” will be the very tuneful and yet soulful Symphony No. 8 in G major by Antonin Dvorak. Composed in 1889 and conducted by the composer at its premier in Prague on February 2, 1890, the piece is decidedly different from his previous works in that it is much more cheerful and lyrical. This is likely based on the composer’s stated inspiration, Bohemian folk music. The symphony is presented in four movements and structured with an unusual variety of themes. Each movement contains lyrical elements punctuated with unexpected elements one conductor likened to a “tranquil summer day interrupted by a thunderstorm.”

The full concert begins at 7:30 p.m. with a pre-concert talk by several of the “composers” as portrayed by talented members of the Inland Valley Repertory Theatre Company at 6:30 p.m.  Audience members are also always invited to stay for the post concert reception to meet the musicians and chat with other music aficionados.

“This highly successful season has evoked beautiful memories… from the “Mosaico” concert in October, to “Home for the Holidays,” “Echoes of America,” “Masterworks Melange,” and now our season finale. The concerts have all been well attended and that is because we in the Inland Empire value music and the contributions that it makes to our daily lives and to our community,” said Symphony Board President Judith Valles.

Those interested in a glimpse of cellist Biryukov’s artistry are invited to attend a pre-concert Musicale sponsored by the San Bernardino Symphony Guild. The event will be held Friday, May 27 at 7 p.m. at the San Bernardino Garcia Center for the Arts located on the corner of E and 11th Streets. Tickets are $40 and may be obtained by calling (909) 496-6022.

Although the 2015/16 symphony season with conclude with this concert, audiences can also hear and see the San Bernardino Symphony when they open the Redlands Bowl Summer Music Festival with a Gershwin spectacular on Friday, June 24. The Symphony will also perform at the Bowl on Friday, July 8 with an evening of Bernstein and Sondheim. The Redlands Bowl is at 25 Grant Street. All Bowl concerts are free to the public and begin at 8 p.m.

On September 18 at 3 p.m., the San Bernardino Symphony perform at Our Lady of the Lake Church in Lake Arrowhead.  Sponsored by the Arrowhead Arts Association, this event will also include a performance by the All Mountain Ensemble. Tickets to this event are available by calling (909) 337-0284.

All regular season concerts are performed at the historic California Theatre, 562 W. 4th Street, San Bernardino. Tickets may be purchased by calling (909) 381-5388 or visiting the Symphony box office at 198 N. Arrowhead Ave., San Bernardino Monday through Friday from 9 a.m. to 5 p.m. Tickets are also available on line at www.sanbernardinosymphony.org, and with limited availability at the theater box office the evening of each event. Military and student tickets are always just $10.