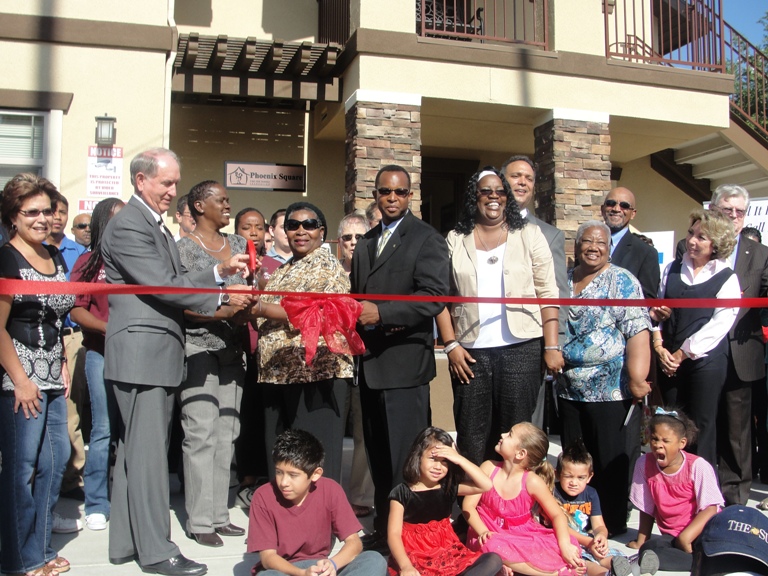 Carey Jenkins, from the San Bernardino Economic Development Agency was followed by Mayor Morris in giving a few words, commenting on the nature of his working relationship with Kim Carter, giving her praise for her efforts.

“Today is a great day in San Bernardino,” said Kim Carter, “This is the model for affordable housing in the Inland Empire.”

As the final speaker, Kim Carter explained that this was a $1.5 million dollar project that was funded in part by the Weingart Foundation, Affordable Housing Solutions, the City of San Bernardino’s Economic Development Agency, and was furnished by Ashley’s Furniture. Kim Carter additionally acknowledged the businesses that helped make the creation of the Phoenix Square possible, including WLC Artitects, Inc., Juan Dial (project manager), Solomon Ujamaa, Inc. (construction manager), and Absolute Contractors (general contractors).

The event culminated with a ribbon cutting which was facilitated by the San Bernardino Chamber of Commerce.

“This is a great day for the City of San Bernardino,” said John Kunkel, Director of Communications for Time for Change Foundation. “It was so exciting to see our government and business leaders join together to celebrate the grand opening of this project, especially during these challenging times for our City.”