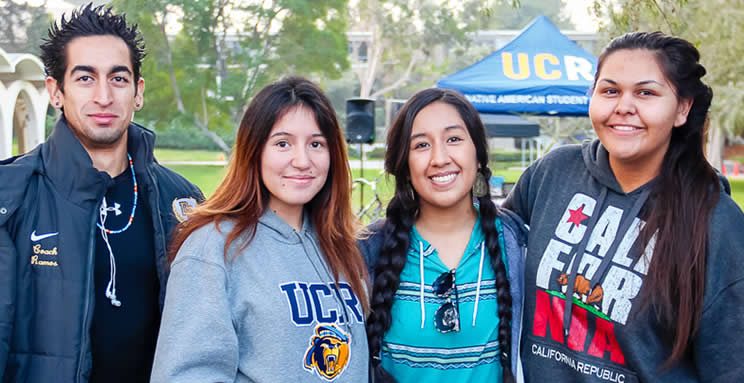 The 10-year, $1.28 million grant is a gift from the San Manuel Band of Mission Indians to UCR’s Native American Student Programs

Riverside, CA — Over the past 13 years, more than 500 Native American high school students from across the country have gotten a taste of college life courtesy of a one-of-a-kind summer experience held at the University of California, Riverside.

Known as the Gathering of the Tribes Summer Residential Program, the eight-day initiative is organized by UCR’s Native American Student Programs, or NASP. According to NASP Director Joshua Gonzales, between 30 and 50 students attend each year, with about 30 percent of them coming from out of state. With the exception of transportation to and from UCR, most costs associated with attending are covered by NASP.

The program was designed to help American Indian youth get acclimated to a university setting by living in on-campus residence halls and immersing themselves in a variety of academic, cultural, and personal development workshops. During their time at UCR, participants attend daily writing sessions geared toward responding to essay prompts on the University of California’s standard undergraduate application. They also hear from UCR-affiliated guest speakers — including faculty — and tour research hubs like the School of Medicine.

So far, Gonzales’s approach has been a fruitful one. A UCR alumnus, he first came to campus on a cross country/track and field scholarship. He was active as a student in the NASP office and became a program assistant there in 2005 — the same year the Gathering of the Tribes initiative was activated by former NASP Director Earl Dean Sisto. Since then, Gonzales said, 93 percent of the summer program’s participants have gone on to attend community colleges or four-year universities, with many later receiving master’s and doctoral degrees.

In recent years, the success of the initiative caught the attention of the San Manuel Band of Mission Indians, a federally recognized American Indian tribe located near the city of Highland, at the base of the San Bernardino Mountains. San Manuel Chairwoman Lynn Valbuena said San Manuel targets four key areas to support through charitable giving, with education-related causes comprising one of those areas.

“The tribe is aware that the number of Native American high school graduates across the country who go on to college is relatively small, and we intend to increase that number both regionally and nationally,” Valbuena said.

With addressing those concerns a top priority, in June the San Manuel Band of Missions Indians awarded $1.28 million to NASP. Gonzales said the grant is the largest NASP has received in its 38-year history. It will be used to support the office’s long-term goal of expanding efforts to reach college-going Native American students and better serve them as they earn their degrees.

About The San Manuel Band of Mission Indians

The San Manuel Band of Serrano Mission Indians is a federally recognized American Indian tribe located near the city of Highland, Calif. The Serrano Indians are the indigenous people of the San Bernardino highlands, passes, valleys and mountains who share a common language and culture. The San Manuel reservation was established in 1891 and recognized as a sovereign nation with the right of self-government. As an indigenous community the origins and history of the San Manuel Band of Mission Indians stem from our relationship with the land and to all who share it. Since ancient times we have expressed ourselves through a culture of giving. Today, San Manuel is able to answer the call of Yawa’ (Serrano word meaning “to act on one’s beliefs”) through partnerships with charitable organizations. We have drawn upon our history, knowledge, expertise and cultural values to direct our philanthropic giving in our local region, as well as to Native American causes nationwide. For more information, visit http://www.sanmanuel-nsn.gov.